ABOVE: A TASTE OF TEMPERATURE: Adult Drosophila ventral nerve cord motor neurons expressing the gustatory thermoreceptor Gr28bD (left); in gray is a 3D reconstruction of the motor neurons, in green is neural activity in response to heat, with the green trace showing calcium currents in a single neuron (right).
MISHRA ET AL., SCI REP, 8:901, 2018

Tools that use light, drugs, or temperature to make neurons fire or rest on command have become a mainstay in neuroscience. Thermogenetics, which enables neurons to respond to temperature shifts, first took off with fruit flies about a decade ago, but is emerging as a new trick to manipulate the neural functioning of other model organisms. That’s due to some advantages it affords over optogenetics—the light-based technique that started it all.

Genetic toolkits such as thermogenetics and optogenetics follow a basic recipe: scientists pick a receptor that responds to an external cue...

Optogenetics revolutionized our understanding of how the brain’s wiring affects animal behavior. But it comes with drawbacks. For one, delivering light into the deepest regions of the brains of nontransparent animals is a challenge. In mice, this requires surgically inserting optical fibers into the brain, tethering the animal to the light source. Researchers working with adult fruit flies can cut a window through the head cuticle to access the brain. In both cases, the necessary experimental setups are invasive and often time and effort intensive.

Additionally, the light intensity required for optogenetics tends to damage tissue. “You pump a lot of light through the optical fiber to activate neurons,” says Vsevolod Belousov, a biochemist at the Russian Academy of Sciences in Moscow who develops thermogenetic tools. “In general, this is not avoidable.”

Thermogenetics allows neuroscientists to sidestep these issues by harnessing proteins that respond to changes in temperature with stronger levels of activation than light-triggered switches, with less-invasive stimulus delivery. Unlike the light receptors of optogenetics, however, most of the thermoreceptors currently in use only allow researchers to turn neurons on, but not off; and their use in rodents is still evolving.

Here, The Scientist lays out the current state of the thermogenetic toolbox for different model organisms.

Turning The Heat On Fruit Flies

Thermogenetics owes its humble beginnings to Drosophila research and is by far most developed for use in fruit flies. In the early 2000s, Toshihiro Kitamoto first used a mutated form of a protein called shibire to shut down synaptic communication in specific fly neurons at temperatures above 29° C. Shibire is an enzyme in the dynamin superfamily, which is involved in vesicle formation; its mutant version inhibits chemical transmission in a wide range of neurons within a few minutes of a temperature hike. But because dynamins affect many cellular processes, the use of shibire can have far-reaching, nonspecific effects.

Another class of proteins called thermo-TRPs is more suitable for thermogenetics. ThermoTRPs are cation channels of the transient receptor potential family that normally mediates temperature preferences, both in the brain and elsewhere in the body. These channels respond dramatically to temperature shifts as small as 1°–2° C. The Drosophila TrpA1, for example, turns on slightly above 25° C, and the rat TRPM8 turns on just below 25° C.

When scientists first expressed TrpA1 in the motor neurons of fruit flies, they found that heating up the cells paralyzed the animals. “We got warm water and started dunking them in and that just made them pass out,” says Paul Garrity, a biologist at Brandeis University who pioneered the use of thermoTRPs. “It was like a magic trick.”

Fruit fly researchers have yet another option: Gr28bD, a gustatory receptor that was recently found to respond to heat in fruit fly neurons, although at the much higher temperatures of 32° C to 36° C. Researchers at the University of Missouri in Columbia are developing the protein as another thermogenetic tool. So far, the Gr28bD receptor works when expressed in Xenopus oocytes and in motor neurons of adult fruit flies (Sci Rep, 8:901, 2018).

Like thermoTRPs, Gr28bD is a cation channel, which only allows researchers to activate neurons, says Mirela Milescu, a University of Missouri biophysicist studying the structure-function relationship of this protein. The hope, she says, is to engineer it to work at a lower activation temperature, and perhaps even to turn it into an inhibitory tool.

The thermoreceptor proteins shibire, thermoTRPs, and Gr28bD can all be activated by changing ambient temperature in a so-called hot box, a fly container with a temperature regulator. The process is simple and noninvasive. But ambient heating has several disadvantages. For starters, the temperature change is slower than direct heat delivery, says Belousov, and spatial resolution is lacking because you activate the entire animal. For example, using a hot box, all the cells with TrpA1 in Drosophila get activated and stay active for the duration of the experiment. “Until you cool down, those channels are open and the neurons remain depolarized,” he says. “This is not how neurons normally behave; they fire in pulses.”

To address that limitation, Barry Dickson, a neuroscientist at the Howard Hughes Medical Institute’s Janelia Research Campus in Ashburn, Virginia, built a more targeted heat-delivery system. The Fly Mind Altering Device, or FlyMAD, uses a video camera to track a fly as it moves around in a box. Upon locating the fly, the device shines an unfocused infrared beam to deliver heat directly to its head, allowing researchers to target the brain and to activate thermogenetic proteins more quickly (Nat Methods, 11:756–62, 2014).

Overall, thermoTRPs can only be used to activate neurons because they bring cations into the cell. Belousov and others, however, are engineering these channels to switch conductance from calcium to chloride ions, which will allow them to inhibit neural activity as well.

Getting Thermal with Zebrafish

Most zebrafish neuroscience studies are performed using embryos and larvae, because many of the advantages of juvenile zebra-fish—small size, transparency, and a small and simple brain—are lost in adults, says David Prober, a neurogeneticist at the California Institute of Technology in Pasadena.

We wanted an alternative approach that didn’t use a visual stimulus to activate the neurons.

Larvae’s transparency means researchers can use ambient lighting to access any neuron in the brain noninvasively with optogenetics. The problem, however, is that seeing the light turn on induces a behavioral response in the animals, says Prober. “So we wanted an alternative approach that didn’t use a visual stimulus to activate the neurons.”

Prober’s lab tested another TRP channel called TRPV1, which gets activated close to 43° C as well as by capsaicin, the molecule that makes chili peppers hot. At a low concentration of capsaicin, TRPV1 activation causes neurons to fire; at a higher concentration, its over-activation causes those neurons to die. TRPV1 can thus switch neurons both on and off, although the off switch is permanent. Capsaicin-induced TRP channel activity lacks the millisecond control of optogenetics, but its effect over the course of seconds works for behaviors that occur over a long timescale, such as sleep (Nat Methods, 13:147–50, 2016).

Another receptor from the thermo-TRP family that is showing promise in zebrafish research is rattlesnake TRPA1, which turns on around 28° C. That’s well within zebrafish’s physiological range, yet high enough so that larvae can be raised at ambient temperatures without activating the channel. In contrast, Drosophila TrpA1, which turns on slightly above 25° C, would be incompatible with use in zebrafish studies because 25° C is the lowest temperature at which scientists raise the animals, says Prober.

“This can even be called a branch of optogenetics,” says Belousov, because they still use light as an activating stimulus, except that it is not in the visual but in the invisible infrared range. His team tested the method by directing the infrared beam at embryos embedded in agarose. They are now developing ways of using this system in actively behaving zebra-fish larvae (Nat Comms, 8:15362, 2017).

Warming Up To Mammals

Optogenetics is widely used in mammals, but its invasiveness and the low conductance of channelrhodopsins—the photoreceptive channel proteins that are modified for use in optogenetics studies—have led researchers to explore thermogenetics.

Ultimately, for all of the methods, the name of the game is trying to get a really short spike and then immediately turning off your stimulus.

ThermoTRPs have a much higher conductance, turning on neurons with little external stimulation. But finding a thermo-TRP that works at around 37°–38° C, the physiological temperature of mammals, has so far been challenging. Neither rat TRPM8, nor fly TRPA1 nor rattlesnake TRPA1 can be used in mammals because their activation thresholds are far below mammalian body temperatures.

TRPA1 from the rat snake, however, is active around 38.5° C, which is fairly close to mammalian brain temperature, says Belousov. His lab reported that this channel could activate cultured rodent neurons (Nat Comms, 8:15362, 2017), but its performance in behaving mice remains to be shown.

Scientists have also used rat TRPV1 to activate cultured mammalian cells. Even though the temperature at which half the TRPV1 channels are activated is thought to be around 42° C, Arnd Pralle, a biophysicist at the University at Buffalo, New York, successfully used TRPV1 at 39° C to activate neurons in the motor cortex, dorsal striatum, and in the ridge between dorsal and ventral striatum of freely moving mice. At that temperature, only about 15 percent to 20 percent of TRPV1 channels open, but the resulting calcium current is enough to turn on the neurons (eLife, 6:e27069, 2017).

“You’re not trying to keep the temperature at 43° C for several minutes,” says Polina Anikeeva, a neural nanotechnologist at MIT. “Ultimately, for all of the methods, the name of the game is trying to get a really short spike and then immediately turning off your stimulus.” 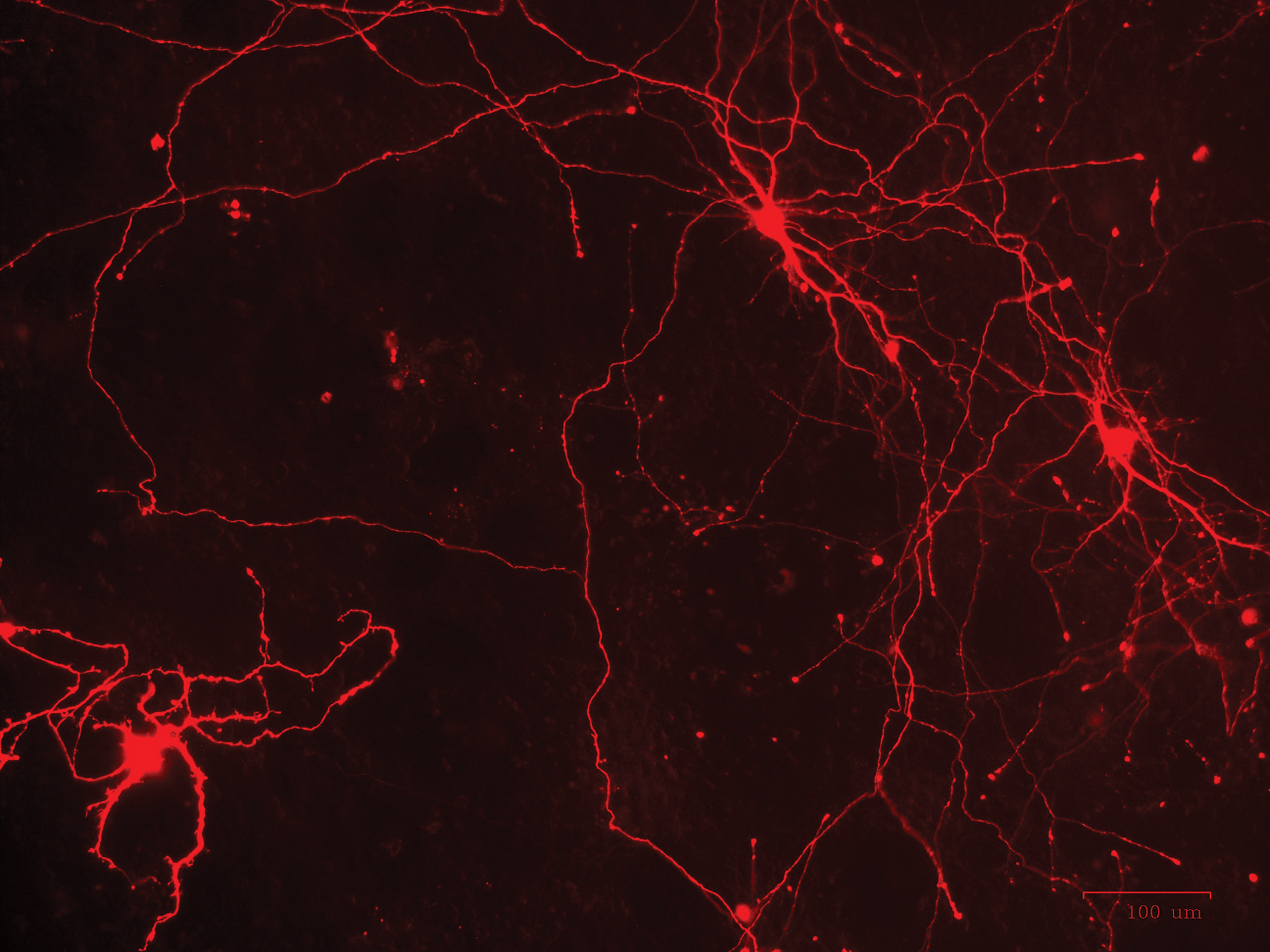 Unlike in fruit flies and zebrafish, of course, ambient warming doesn’t raise the temperature of warm-blooded animals. The field desperately needs new ways to wirelessly deliver energy deep into the tissue, says Belousov. The focused infrared beam that his team developed works as a vehicle for thermal delivery at single-cell resolution until about 2–3 mm deep into the brain by adjusting wavelength and pulse duration. But stimulating areas deeper in the brain still requires the surgical implantation of fibers.

Although limited, infrared radiation is still absorbed by the body, curbing penetration depth, says Anikeeva. “The only field that our body truly does not couple to is magnetic.”

Pralle, Anikeeva, and others are therefore developing “magnetothermal” approaches, in which magnetic nanoparticles are injected into the brain and activated by a high-intensity magnetic field. The neuro-localized magnets then convert that localized magnetic energy into heat, which in turn activates TRPV1 channels. Using this technique, Pralle’s team was able to tweak the brain regions responsible for walking, rotational, and freezing behavior in untethered mice (eLife, 6:e27069, 2017).

Recently, Pralle’s team demonstrated the use of a thermosensitive chloride channel, anoctamin 1 (TMEM16A), to silence neurons in rat hippocampal cultures using magnetic nanoparticles. The channel’s big benefit is that upon activation, around 38°–39° C, it inhibits neurons (Front Neurosci, 12:560, 2018).

“The end goal is really to use all these techniques to turn different regions of the brain on and off and analyze the circuits that play together,” says Pralle.