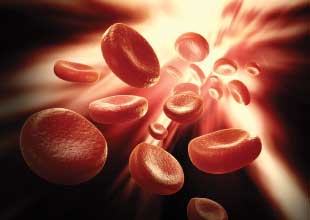 © LIYA GRAPHICS/SHUTTERSTOCK.COMBlood is the only tissue that makes contact with every organ in the body. Theoretically, probing the DNA, RNA, vesicles, and cellular debris it carries could help diagnose or monitor conditions from placental disorders to Alzheimer’s disease.

The first application of this approach was prenatal genetic screening—which analyzes fragments of fetal DNA in an expectant mother’s blood—available to clinicians since October 2011. So far, these tests have largely focused on identifying chromosomal abnormalities such as Down syndrome. But expanding their utility to monitoring other circulating biomarkers, such as RNA and the contents of membrane-bound microvesicles and exosomes, is on the rise.

These blood-borne information sources are distinct from one another in several ways. Exosomes, which measure 30 to 100 nm in diameter, are actively secreted by most of the body’s cells and are loaded with proteins, regulatory microRNAs, fragments of DNA, and other metabolites that can...

While commercial interest in blood biomarkers is so far focused on cancer diagnostics and assessments (see “Banking on Blood Tests,” here), many academic researchers are beginning to explore their use to improve the detection and diagnosis of a number of other conditions. To date, however, there is little consensus on how best to isolate vesicles, extract RNA, store samples, or analyze data from these biomarkers.

“We’re still in the exploratory phase,” says Kendall Van Keuren-Jensen, codirector of the Center for Noninvasive Diagnostics at the Translational Genomics Research Institute in Phoenix, Arizona. “Everybody wants to move toward better standardization, but it’s hard to say for now [what] is the best method.”

The Scientist talked with researchers about how to probe such bloodstream biomarkers. Here’s what we learned.

Project: Mapping the state of body organs based on methylated DNA in plasma

Background: Lo was among the first researchers to detect fetal DNA in samples of maternal blood, a noninvasive method that is now used for clinical prenatal testing to identify myriad fetal conditions. “DNA in the plasma is basically a mixture of DNA from different organs, so I thought it would be nice if we were able to identify the anatomical parts of the body that are abnormal just from a blood test,” says Lo.

Work so far: Lo’s group homed in on two kinds of methylation markers: a set that was unique to each of 14 tissues in the body, and another set that had varying levels of methylation across all the tissues, so they were applicable to all 14. They extracted blood-plasma DNA and used bisulfite sequencing to identify the methylation status of DNA fragments. Then, they applied a deconvolution algorithm to parse the data. With 5,800 markers from different tissues, “it’s like 5,800 simultaneous equations with 5,800 unknowns, so the algorithm reaches a solution that best explains what you’re seeing in the blood,” says Lo.

Even with relatively low sequencing coverage, the researchers were able to track methylation patterns linked to transplanted organs and liver cancer (PNAS, 112:E5503-E5512, 2015, doi:10.1073/pnas.1508736112). In each case, the test reliably identified which organ an aberrant piece of circulating DNA had originated from. For example, the blood test detected copy number alterations in the genome of cancer cells, and based on the changed methylation pattern, the researchers could identify the source as a liver tumor. “We were pretty surprised by how well it worked,” says Lo. “It’s a strong proof-of-principle.”

Considerations: There are many unknowns about the plasma methylome, such as how methylation patterns vary across individuals and how stable methylated DNA fragments in circulation are, says Lo. Approximately 15 percent of the markers they tested showed significant differences between participants. Because bisulfite conversion during sequencing can destroy some DNA and create bias, plasma methylation studies “could benefit from more-sensitive methods such as single-molecule sequencing,” says Lo.

Looking ahead: Lo says that maps of tissue-specific methylation patterns in plasma could find many applications, such as tracking transplant rejection or identifying the source of circulating tumor DNA. “When you don’t know what organ is aberrant, this is a good place to start,” says Lo.

Project: Developing a blood test for Alzheimer’s disease based on analysis of proteins in circulating exosomes

Background: Currently, doctors diagnose Alzheimer’s disease mainly using clinical symptoms, brain imaging, and sometimes cerebrospinal fluid extraction. Although such diagnoses are usually correct, only an autopsy can confirm the hallmark presence of amyloid plaques and neurofibrillary tangles of misfolded tau protein in the brain. Exosomes derived from neurons contain cell-specific proteins and RNAs that can be isolated from the blood-borne vesicles and used to reveal the presence of malfunctioning proteins in patients with disease symptoms.

A liquid biopsy for protein or RNA biomarkers could help clinicians diagnose and monitor patients or at-risk individuals. “We wanted to get closer to something like a biopsy material from a tissue where a biopsy is not feasible,” says Goetzl. If abnormal amyloid and tau protein can be traced in circulating exosomes, periodic blood tests could be used to monitor disease progression in patients with Alzheimer’s disease, he adds.

Probing proteins: Goetzl and his colleagues used paired plasma samples taken 1 to 10 years before disease diagnosis and just after diagnosis. They isolated all plasma exosomes using System Biosciences’s ExoQuick, a polymer-based method to precipitate the vesicles from biological fluids. The researchers then used an antibody that binds to neuronal surface proteins to enrich for neuron-derived exosomes, and examined the proteins present within this fraction of exosomes.

They found that levels of tau, phosphorylated tau, and amyloid-β protein sequestered inside exosomes were significantly higher in people with Alzheimer’s than in those with frontotemporal dementia or without any cognitive impairments. For example, levels of phosphorylated tau were approximately 10 times higher in Alzheimer’s samples than in normal controls. The differences could be spotted with 96 percent accuracy in samples taken up to 10 years before the onset of disease symptoms.

Finding the right cohorts for such comparisons is crucial, because many older participants already exhibit signs of cognitive loss, says Goetzl. For their studies, the group recruited participants who were cognitively normal for their age and had no family history of Alzheimer’s or predisposing risk factors such as diabetes (Alzheimers Dement, 11:600-07, 2015).

Considerations: It’s still unknown whether the total quantity of neuronal exosomes present in circulation changes with disease states, so normalizing data to per-exosome levels is important. Working quickly after proteins are extracted from the exosomes is also key. “Exosomes protect the proteins pretty well, but once we extract cargo from them it becomes very susceptible [to degradation],” says Goetzl. “You have to be action-ready at that point.”

Looking ahead: Goetzl cofounded Orange County, California–based NanoSomiX in 2013 to develop a blood test for Alzheimer’s disease. “Our hope is that if we can identify people at risk 10–15 years ahead of time and they could take preventive medicines, we can reduce the burden of disease,” he says.

Background: Exosomes are most commonly distinguished from other vesicles by their small size and buoyant density, how they’re formed within a cell, and the presence of certain intracellular markers. Many recent studies have reported changes in miRNA levels in postmortem brain tissue as well as in the blood of patients with Alzheimer’s disease.

Monitoring miRNA: Smalheiser’s team used a differential ultracentrifugation method that progressively washes away fractions such as free-floating RNA, protein aggregates, and cell debris, leaving a pellet enriched in exosomes. Then, they extracted RNA from the exosomes and sequenced it. After building a data set of mature miRNAs identified within the pellets, they applied a machine-learning model to predict whether a particular sample belonged to an individual with Alzheimer’s or a control subject, and identified a panel of seven miRNAs that could distinguish the two groups with 83 percent to 89 percent accuracy (PLOS ONE, doi:10.1371/journal.pone.0139233, 2015).

Tips: The centrifugation method the researchers used allowed them to obtain “a relatively clean exosome-enriched fraction,” says Smalheiser. While extracting RNA with the commonly-used reagent Trizol, his group found that adding a glycogen carrier to the reagent improved yields of raw sequences and mappable reads by an average of approximately 23 percent, a step that could work for other low-yield RNAs, he adds. 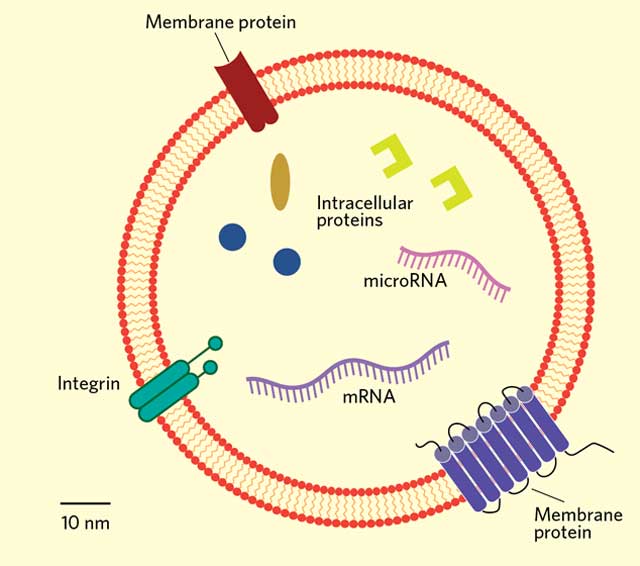 Background: RNAs that act as signals between cells can be used to diagnose disease and might also serve as novel drug targets. Regulatory miRNAs may be important biomarkers in conditions such as brain injury, where more than one cellular function is disrupted. Several researchers work with such RNAs, and there is a wide range of available protocols and a lack of agreement on how to deliver reproducible results. As part of the National Institutes of Health’s Extracellular RNA Communication Consortium, Laurent, Keuren-Jensen, and others are working to develop a consensus on how to test for these circulating miRNAs and improve the reproducibility of extracellular RNA studies (J Extracell Vesicles, doi:10.3402/jev.v4.26533, 2015).

Validating vesicles: Laurent works with RNA trapped within placental vesicles released into the maternal bloodstream during pregnancy in order to identify miRNA signatures of placental disorders, such as preeclampsia and intrauterine growth restriction (IUGR). She and her colleagues are optimizing ways to extract miRNA and analyze data from both exosomes and microvesicles, using protocols the group has developed in their lab. Preliminary results reveal that researchers can track pregnancy-specific miRNAs isolated from both exosomes and microvesicles in maternal serum, and certain signatures found later in pregnancy correlate even more closely with placental tissue.

Brain busters: To track how subconcussive trauma—head impact that doesn’t cause a clinical concussion—affects brain cells, Van Keuren-Jensen’s group placed sensors to monitor force and other impact data inside football players’ helmets and tracked the college players from the season’s first practice session until the very last game. Over the same period, the researchers gathered blood, urine, and saliva samples from the athletes and sequenced all RNAs to find biomarkers that correlated with data from the sensors. The research team used a wide range of commercially available kits and, with collaborators at Harvard University, they are now in the process of comparing extracellular RNA data collected in different ways under a project funded by the National Institute of Standards and Technology. “We do see some big differences, depending on what kit or what isolation method is used,” says Van Keuren-Jensen. “It’s very hard to say which kit works the best right now.”

Considerations: Sequencing kits use short pieces of DNA with “sticky” ends to attach to target molecules that will be amplified. These ends, known as adapters, can be big contributors to variability. Kits from some companies yield fewer adapter dimers but cause more sequencing bias, while others have more-randomized adapters that might bind better to some miRNAs. “These can add up to big differences and could be a big contributor to reproducibility issues,” says Van Keuren-Jensen.

Tips: Working with fewer batches of samples that are handled by a single person can reduce variability, says Laurent. Using internal standards—an RNA that isn’t altered by the disease or condition being studied—is another way to increase reproducibility across labs. Without a universal standard, Laurent says, “having that internal standard allows you to normalize away a lot of the effects of yield or batch variation.”

Publish and share details of what kits and isolation methods you use both in talks and manuscripts, says Van Keuren-Jensen. “If you want to replicate someone’s data, you’re probably going to want to use the same kit they used.”

Jyoti Madhusoodanan is a freelance writer based in San Jose, California. Portions of this article were reported while on a project with the University of California, San Francisco.