Your article "Does Your Dog Understand You?"1 brought to mind a question that, as a dog lover, I have wondered about: Do dogs have any kind of sense of the future? Or is that ability so abstract that it can only exist along with the ability for language? Have any experiments ever been done with dogs, such as a kind of Pavlovian conditioning, where there is a temporal separation between the associated conditioning factors that nevertheless still can result in an induced response? And do dogs have a true sense of the past, other than simply retaining an association between objects? In other words, after two weeks of separation, does my dog remember that I left him?

One thing occurred to me while reading the Dec. 20 Vision article;1 while there's no doubt that selection pressure led to canid behaviors that 'fake' or signal intelligence to humans, it... 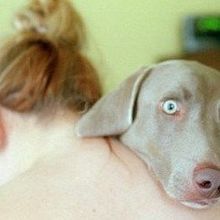