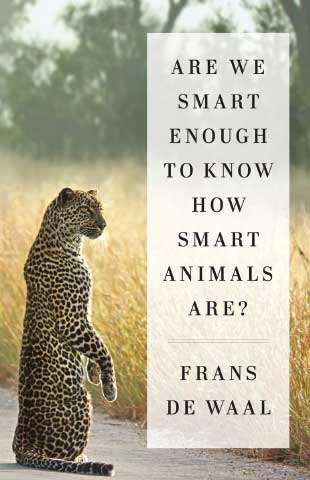 W.W. NORTON, APRIL 2016One early November morning, while the days were getting colder, I noticed that Franje, a female chimpanzee, was gathering all the straw from her bedroom. She took it under her arm out onto the large island at the Burgers’ Zoo, in the Dutch city of Arnhem. Her behavior took me by surprise. First of all, Franje had never done this before, nor had we ever seen other chimps drag straw outside. Second, if her goal was to stay warm during the day, as we suspected, it was notable that she collected the straw while at a cozy temperature inside a heated building. Instead of reacting to the cold, she was bracing for a temperature she could not actually feel. The most reasonable explanation would be that she extrapolated from the previous shivering day to the weather expected today. In any case, later on she stayed...

I never cease wondering about the mental level at which animals operate, even as I know full well that a single story is not enough to draw conclusions. But those stories inspire observations and experiments that do help us sort out what’s going on. The science fiction novelist Isaac Asimov reportedly once said, “The most exciting phrase to hear in science, the one that heralds new discoveries, is not ‘Eureka!’ but ‘That’s funny.’” I know this thought all too well. We go through a long process of watching our animals, being intrigued and surprised by their actions, systematically testing our ideas about them, and arguing with colleagues over what the data actually mean. As a result, we are rather slow to accept conclusions, and disagreement lurks around every corner. Even if the initial observation is simple (an ape collects a pile of straw), the repercussions can be enormous. The question as to whether animals make plans for the future, as Franje seemed to be doing, is one that science is currently quite preoccupied with. Specialists speak of mental time travel, chronesthesia, and autonoesis, but I will avoid such arcane terminology and try to translate the progress into ordinary language. I will relate stories of the everyday use of animal intelligence as well as offer actual evidence from controlled experiments. The first tells us what purpose cognitive capacities serve, while the second helps us rule out alternative explanations. I value both equally, even though I realize that stories make easier reading than experiments.

Consider the related question as to whether animals say goodbye as well as hello. The latter is not hard to fathom. Greeting is a response to the appearance of a familiar individual after an absence, such as your dog jumping up at you as soon as you walk through the door. Internet videos of soldiers being saluted by pets upon return from abroad suggest a connection between the length of separation and the intensity of the greeting. We can relate to this connection since it applies to us as well. No grand cognitive theories are necessary to account for it. But what about saying goodbye?

We dread to say farewell to someone we love. My mother cried when I moved across the Atlantic, even though we both realized that my absence would not last forever. Saying goodbye presupposes the realization of future separation, which is why it is rare in animals. But here, too, I have a story. I once trained a female chimpanzee named Kuif to bottle-feed an adopted infant of her species. Kuif acted in every way as the infant’s mother but lacked sufficient milk of her own to nurse her. We would hand her a bottle of warm milk, which she would carefully give to the baby ape. Kuif got so good at this that she’d even briefly withdraw the bottle if the baby needed to burp. This project required that Kuif and the baby, which she kept on her body day and night, be called inside for a feeding during the daytime while the rest of the colony remained outside. After a while we noticed that instead of coming in right away, Kuif would make a long detour. She’d do the rounds on the island, visiting the alpha male, the alpha female, and several good friends, giving each one a kiss, before she’d walk toward the building. If the others were asleep, she’d wake them up for her goodbyes. Again, the behavior itself was simple, yet the precise circumstances made us wonder about the underlying cognition. Like Franje, Kuif seemed to be thinking ahead.

But what about skeptics who believe that animals are by definition trapped in the present, and only humans contemplate the future? Are they making a reasonable assumption, or are they blinkered as to what animals are capable of? And why is humanity so prone to downplay animal intelligence? We routinely deny them capacities that we take for granted in ourselves. What is behind this? In trying to find out at what mental level other species operate, the real challenge comes not just from the animals themselves but also from within us. Human attitudes, creativity, and imagination are very much part of the story. Before we ask if animals possess a certain kind of intelligence, especially one that we cherish in ourselves, we need to overcome internal resistance to even consider the possibility. Hence this book’s central question: “Are we smart enough to know how smart animals are?”

The short answer is “Yes, but you’d never have guessed.” For most of the last century, science was overly cautious and skeptical about the intelligence of animals. Attributing intentions and emotions to animals was seen as naïve “folk” nonsense. We, the scientists, knew better! We never went in for any of this “my dog is jealous” stuff, or “my cat knows what she wants,” let alone anything more complicated, such as that animals might reflect on the past or feel one another’s pain. Students of animal behavior either didn’t care about cognition or actively opposed the whole notion. Most didn’t want to touch the topic with a ten-foot pole. Fortunately, there were exceptions—and I will make sure to dwell on those, since I love the history of my field—but the two dominant schools of thought viewed animals as either stimulus-response machines out to obtain rewards and avoid punishment or as robots genetically endowed with useful instincts. While each school fought the other and deemed it too narrow, they shared a fundamentally mechanistic outlook: there was no need to worry about the internal lives of animals, and anyone who did was anthropomorphic, romantic, or unscientific.

Did we have to go through this bleak period? In earlier days, the thinking was noticeably more liberal. Charles Darwin wrote extensively about human and animal emotions, and many a scientist in the nineteenth century was eager to find higher intelligence in animals. It remains a mystery why these efforts were temporarily suspended, and why we voluntarily hung a millstone around the neck of biology—which is how the great evolutionist Ernst Mayr characterized the Cartesian view of animals as dumb automatons. But times are changing. Everyone must have noticed the avalanche of knowledge emerging over the last few decades, diffused rapidly over the Internet. Almost every week there is a new finding regarding sophisticated animal cognition, often with compelling videos to back it up. We hear that rats may regret their own decisions, that crows manufacture tools, that octopuses recognize human faces, and that special neurons allow monkeys to learn from each other’s mistakes. We speak openly about culture in animals and about their empathy and friendships. Nothing is off limits anymore, not even the rationality that was once considered humanity’s trademark.

In all this, we love to compare and contrast animal and human intelligence, taking ourselves as the touchstone. It is good to realize, though, that this is an outdated way of putting it. The comparison is not between humans and animals but between one animal species—ours—and a vast array of others. Even though most of the time I will adopt the “animal” shorthand for the latter, it is undeniable that humans are animals. We’re not comparing two separate categories of intelligence, therefore, but rather are considering variation within a single one. I look at human cognition as a variety of animal cognition. It is not even clear how special ours is relative to a cognition distributed over eight independently moving arms, each with its own neural supply, or one that enables a flying organism to catch mobile prey by picking up the echoes of its own shrieks.

We obviously attach immense importance to abstract thought and language (a penchant that I am not about to mock while writing a book!), but in the larger scheme of things this is only one way to face the problem of survival. In sheer numbers and biomass, ants and termites may have done a better job than we have, focusing on tight coordination among colony members rather than individual thought. Each society operates like a self-organized mind, albeit one pitter-pattering around on thousands of little feet. There are many ways to process, organize, and spread information, and it is only recently that science has become open-minded enough to treat all these different methods with wonder and amazement rather than dismissal and denial.

So, yes, we are smart enough to appreciate other species, but it has required the steady hammering of our thick skulls with hundreds of facts that were initially poo-pooed by science. How and why we became less anthropocentric and prejudiced is worth reflecting on while considering all that we have learned in the meantime. In going over these developments, I will inevitably inject my own view, which emphasizes evolutionary continuity at the expense of traditional dualisms. Dualisms between body and mind, human and animal, or reason and emotion may sound useful, but they seriously distract from the larger picture. Trained as a biologist and ethologist, I have little patience with the paralyzing skepticism of the past. I doubt that it was worth the oceans of ink that we, myself included, have spent on it.

In writing this book, I do not seek to provide a comprehensive and systematic overview of the field of evolutionary cognition. Readers may find such reviews in other, more technical books. Instead, I will pick and choose from among many discoveries, species, and scientists, so as to convey the excitement of the past twenty years. My own specialty is primate behavior and cognition, an area that has greatly affected others as it has been at the forefront of discovery. Having been part of this field since the 1970s, I have known many of the players firsthand—human as well as animal—which allows me to add a personal touch. There is plenty of history to dwell on. The growth of this field has been an adventure—some would say, a roller-coaster ride—but it remains endlessly fascinating, since behavior is, as the Austrian ethologist Konrad Lorenz put it, the liveliest aspect of all that lives.