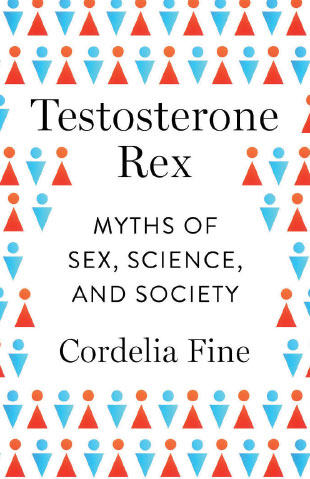 W.W. NORTON, JANUARY 2017Sometimes these days I’m introduced to people as an academic who wrote a book about how the brains of women and men aren’t that different. Disappointingly, the wide range of reactions to this brief biography has yet to include You must be Cordelia Fine! Would you sign this copy of your book that I carry around with me? Instead, people often shoot me a startled look, and then ask whether I’d also deny that there are other basic physiological differences between the sexes. Whenever this happens, I’m always tempted to fix my interrogator in the grip of a steely gaze and pronounce briskly, “Certainly! Testes are merely a social construction,” then see how the conversation flows from there.

Needless to say, this would be especially mischievous given the presumed role of the testes as the biological well-spring of the hormonal essence of masculinity–that...

Despite the frequent assertion that the gaps that favor men (although not those that favor women) are results of invidious social forces, the truth seems to be somewhat more basic. If the various workplace and non-workplace gaps could be distilled down to a single word, that word would not be “discrimination” but “testosterone.”

In much the same way, economists who suggest that inherent sex differences in risk-taking play a major role in economic and occupational inequalities sometimes finger testosterone as the biological culprit. And according to neuroscientist Joe Herbert, author of Testosterone: Sex, Power and the Will to Win, “the testis is the source of most of what we term masculinity”. This is apparently because the testosterone it produces “prepares males for the rigorous and competitive events of reproduction.” Thus, he writes:

Testosterone has to do a great many things: it must influence physique; act on the brain; and inflame sexuality. But this hormone also makes males enjoy taking risks, resorting readily to competitiveness and aggression to obtain what they need, seeking domination over other males, resenting and repelling invasion of their territory.

Science writer and behavioral endocrinologist Richard Francis coined the term “Testosterone Rex” to poke fun at the mistaken conception of testosterone as a “super-actor”—the “plenipotent executor of selection’s demands” that simply “takes care of everything”. Certainly, if the problem to be taken care of is how to create two kinds of individual, then testosterone as a plenipotent super-actor offers a neat and obvious solution. While scientific views on T’s role in social behavior vary around the edges, they generally point to a link with competition as key. Most obviously, this refers to competition to acquire or defend social status, material resources, and sexual opportunities. However, it should also probably include a facet of parenting – protection of that most precious resource, offspring, argues University of Michigan social neuroendocrinologist Sari van Anders. Low T, by contrast, is linked with nurturance. So according to a T-Rex view, high T individuals cluster at the competitive end of the continuum with the other aggressive, sexually inflamed risk-takers, while low T characters huddle at the duller but safer and more caring opposite pole.

Consider, for example, a cichlid fish known as Haplochromis burtoni that comes from the lakes of East Africa. In this species, only a small number of males secure a breeding territory, and they are not discreet about their privileged social status. In contrast to their drably beige non-territorial counterparts, territorial males sport bold splashes of red and orange, and intimidating black eye-stripes. The typical day for a territorial male involves a busy schedule of unreconstructed masculinity: fighting off intruders, risking predation in order to woo a female into his territory, then, having inseminated her by ejaculating into her mouth, immediately setting off in pursuit of a new female. Add to this the fact that territorial males boast significantly larger testes and have higher circulating levels of testosterone than submissive non-territorial males, and a T-Rex view of the situation seems almost irresistible. These high T-fish are kings indeed, presumably thanks to the effects of all that testosterone on their bodies, brain, and behavior. With a large dose of artistic licence, we might even imagine the reaction were a group of feminist cichlid fish to start agitating for greater territorial equality between the sexes. It’s not discrimination, the feminist fish would be told, in tones of regret almost thick enough to hide the condescension, but testosterone.

But even in the cichlid fish, testosterone isn’t the omnipotent player it at first seems to be. If it were, then castrating a territorial fish would be a guaranteed method of bringing about his social downfall. Yet it isn’t. When a castrated territorial fish is put in a tank with an intact non-territorial male of a similar size, the castrated male continues to dominate (although less aggressively). Despite his flat-lined T levels, the status quo persists. If you want to bring down a territorial male, no radical surgical operations are required. Instead, simply put him in a tank with a larger territorial male fish. Within a few days, the smaller male will lose his bold colors, neurons in a region of the brain involved in gonadal activity will reduce in size, and his testes will also correspondingly shrink. Exactly the opposite happens when a previously submissive, non-territorial male is experimentally manoeuvred into envied territorial status (by moving him into a new community with only females and smaller males): the neurons that direct gonadal growth expand, and his testes—the primary source of testosterone production—enlarge. In other words, the T-Rex scenario places the chain of events precisely the wrong way around. As Francis and his colleagues, who carried out these studies, conclude: “social events regulate gonadal events.” Or to put it another way, just in case the significance of this sailed past unnoticed, cichlid testes are a social construction.