Even as Eugene Garfield proposed the impact factor more than half a century ago (Science, 122:108-11, 1955), he had reservations. “I expected it to be used constructively while recognizing that in the wrong hands it might be abused,” he said in a presentation he gave at the International Congress on Peer Review and Biomedical Publication in September 2005.

Indeed, while Garfield had intended the measure to help scientists search for bibliographic references, impact factor (IF) was quickly adopted to assess the influence of particular journals and, not long after, of individual scientists. It has since become a divisive term in the scientific community, with young researchers still striving to demonstrate their worthy within the confines of an antiquated publishing system. In the meantime, waves of criticisms against impact factor have arisen, including the difficulty in consistent reproduction and the easy manipulation of its value (e.g., by encouraging self-citations). “In 1955,...

A journal’s IF may be defined as the average number of citations accrued by research papers, reviews, and other citable articles published in that journal during the two preceding years. For example, if in 2015 a given journal received an average of 10 citations for each article published in 2013 and 2014, its impact factor in 2015 is 10. However, the algorithm is defective in that it endows disproportionate significance to very few highly cited papers. According to a Nature editorial published last July, IF is a “crude and misleading” statistic that is bound to bring about biased assessment of scientific journals and the performance of publishing research scientists.

Accordingly, the Nature Publishing Group has updated its metric list to include a two-year median number of citations, instead of the average number used by IF. This limits the influence of a few highly cited papers. However, the two-year time window is still inappropriate for many disciplines with large temporal variation in citation numbers.

To address this, another metric, known as the h5 index, is gaining popularity. Proposed by Google Scholar Metrics in 2012, the h5 of a given journal represents the largest number of articles that have been cited at least that many times each during the preceding five years. For example, if a given journal has published 10 papers, each of which has been cited at least 10 times during the past five years, its h5 index is 10. But h5 is also an imperfect solution, as it is still influenced by the volume of papers published and the scope of journals. In other words, high-yield journals will naturally garner higher h5 values, regardless of overall quality.

In 2015, the National Institutes of Health (NIH) introduced yet another metric, termed the relative citation ratio (RCR), and has since begun using the RCR in the agency’s funding decisions. The methodology, which is transparent and freely available, works based on the performance of an article against the average citations of its field’s journals. However, some experts find the RCR “too complicated and too restrictive,” bibliometric specialist Lutz Bornmann of Max Planck Society in Munich told Nature last November, adding that he has no plans to adopt it.

Clearly, a new, more-balanced metric is still needed to accurately capture a given journal’s academic level in terms of high-quality and high-impact articles. 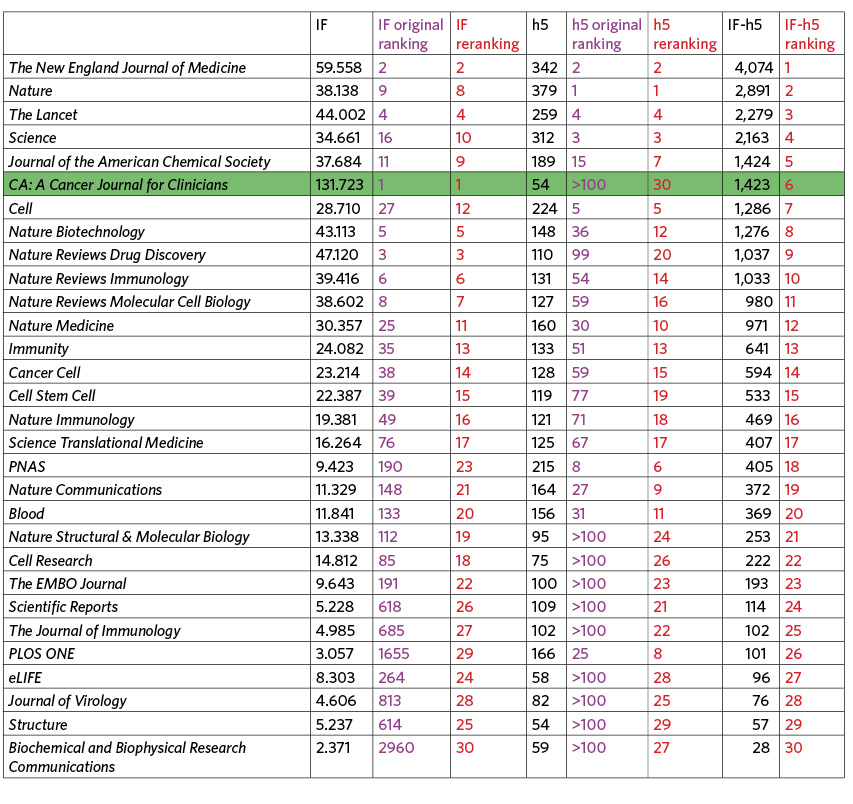