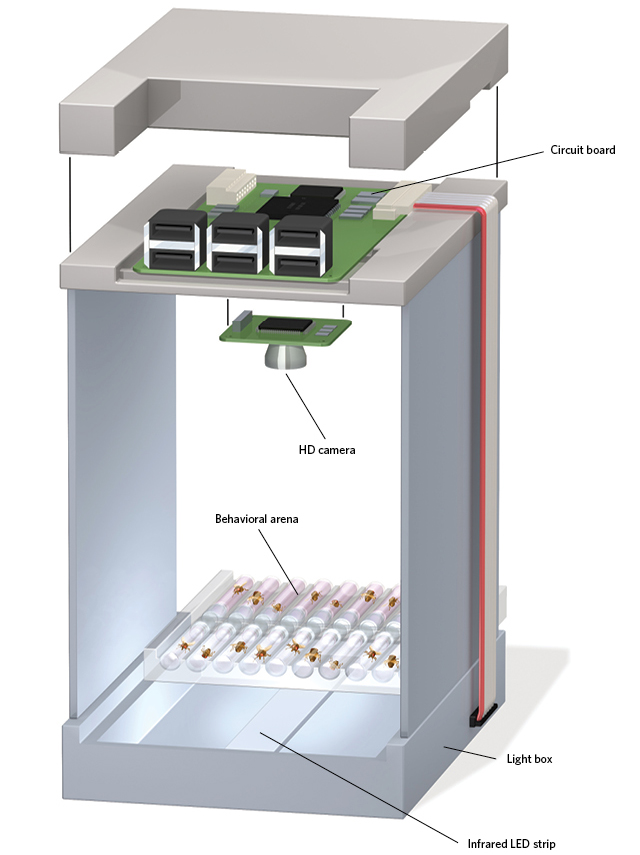 PRINT AND BUILD: The basic setup of the Gilestro-designed, research-grade ethoscope consists primarily of a circuit board, a camera, an infrared LED light strip, and the 3-D–printed housing components. The housing is assembled with regular hardware-store nuts and bolts and the device is powered via a USB cable. Between 1 and 20 flies can be placed in any of eight possible 3-D–printed behavior arenas, which slide into place above the housing’s light box.© GEORGE RETSECK

Understanding how the brain controls behavior is a holy grail for many neuroscientists. Model organisms such as the fruit fly offer a wide array of genetic tools for investigating behavioral questions, but for scientists wishing to do such experiments on a large scale—a discipline called ethomics—there are few technological options.

Drosophila activity monitoring (DAM) systems (from TriKinetics in Massachusetts)—which use one or more infrared light beams to detect the movements of flies in assay...

Systems that use an HD camera mounted above a fly-containing chamber, on the other hand, provide detailed behavioral data, but have typically been costly, says Gerry Rubin of the Howard Hughes Medical Institute’s Janelia Research Campus in Virginia. So using a large number of such devices, as would be necessary for ethomic studies, would be prohibitively expensive.

Taking advantage of recent cost reductions in computer parts, HD cameras, and 3-D printing, Giorgio Gilestro of Imperial College London and colleagues have created affordable and adaptable ethoscopes. They’re so cheap, in fact, that unlike other camera-based systems, they make running many devices at once eminently doable.

Each ethoscope consists of a single circuit board linked to a small HD camera, supported in a 3-D–printed housing above one of eight possible 3-D–printed behavior arenas. The arenas are designed for different behavioral assays, and three optional modules—enabling light stimulation, chamber agitation, or gas infusion—increase the system’s versatility further. For example, Gilestro’s team employs the agitation module to arouse individual insects that have fallen asleep during studies of sleep deprivation in flies.

“Collecting all these different assays and integrating them into an apparatus that you can make by 3-D printing . . . has made the cost of entry [for behavioral scientists] much lower,” says Rubin, who was not involved with the project. “It’s an important contribution to the field.”

The 3-D printing plans, parts list, and software are all free to download at gilestrolab.github.io/ethoscope/. The team even provides plans for Lego or cardboard ethoscopes for educational purposes, but recommends the 3-D–printed version for research. (PLOS Biol, 15: e2003026, 2017)