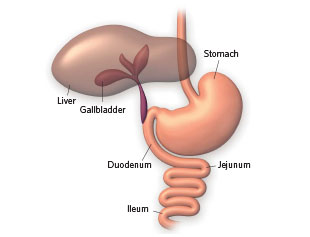 THE BEFORE: This diagram represents a presurgical mouse digestive system.© GEORGE RETSECKFor obese patients undergoing a gastric bypass, such as the commonly used Roux-en-Y procedure, the surgery is extensive. “It basically changes the whole anatomy of the GI tract,” says Naji Abumrad of Vanderbilt University. To scale down such procedures, Abumrad and his colleagues developed a new surgery in which the bile duct, which normally empties into the duodenum, is diverted farther down the small intestine to the ileum. In obese mice, this leads to weight loss, lower cholesterol, reduced blood sugar, and increased energy expenditure—effects similar to those achieved with gastric bypass—without chopping up the intestine. 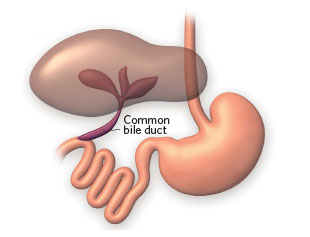 BILE DIVERSION: To encourage bile acid absorption and recirculation, the common bile duct is disconnected from the duodenum and reconnected at the ileum. Metabolic and weight-loss benefits are similar to those of mice who receive the traditional Roux-en-Y procedure.©... 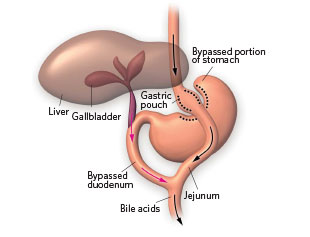 ROUX-EN-Y: This common procedure to treat obesity shrinks the stomach and redirects the intestine to reduce calorie absorption. The duodenum, carrying digestive juices from the bile duct, is connected to the jejunum below where it has been connected to the gastric pouch.© GEORGE RETSECKIt has been suggested that these additional perks might be the result of increased recirculation of bile acids from the gut back to the liver. Bile acids, which are known to regulate metabolism and glycemic control, are mainly absorbed in the ileum region of the small intestine, hence the decision by Abumrad’s team to reroute the bile ducts directly to this target. Sure enough, the mice that received bile-diversion surgery exhibited increased bile acid recirculation, as well as higher serum bile acids.

As is the case with Roux-en-Y, the animals also displayed postsurgical alterations in their gut microbiomes—the compositions of which resembled those of lean mice. Gut microbes are capable of modifying bile acids, says Abumrad, suggesting the bugs themselves may have contributed to the increased bile recirculation. “If we understand the mechanism,” says Patrick Tso of the University of Cincinnati, “there may even be a therapeutic or nutritional approach to reap the benefits of this without actually doing surgery.” (Nature Communications, 6:7715, 2015)