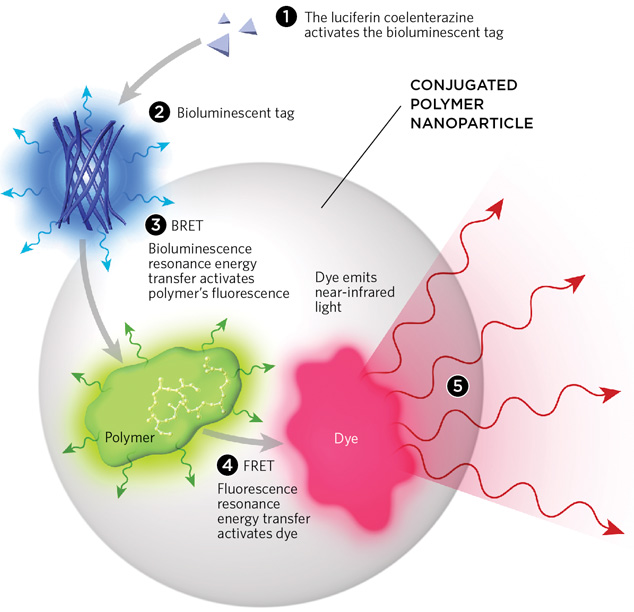 BRIGHT AND SAFER: Self-luminescing nanoparticles use a two-step relay of resonance energy transfer to generate near-infrared emission by an incorporated dye. The emitted long-wavelength near-infrared light is less absorbed and scattered by the body’s tissues than short-wavelength light, helping to overcome the problem of background interference.GEORGE RETSECK

Fluorescence imaging in living animals and people faces a major obstacle—body tissues not only autofluoresce under external illumination with short-wavelength light, but also absorb and scatter the light, creating a lot of background interference. 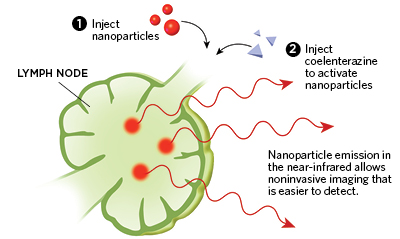 GEORGE RETSECKSelf-luminescing quantum-dot conjugates overcome this obstacle by a process called bioluminescence resonance energy transfer (BRET). The dots, joined to a bioluminescent protein, harness short-wavelength light energy from the protein to activate their own long-wavelength, near-infrared light emission in a part of the spectrum where background is minimized. However, being made primarily of heavy metals, the dots introduce a different problem: toxicity.

Like the quantum dots, these carbon-based polymer nanoparticles are conjugated to a bioluminescent protein, but unlike quantum dots, the particles themselves do not directly emit near-infrared light in response to BRET relayed from the bioluminescent protein. Instead, they emit light in the short-wavelength range. The nanoparticles are therefore also combined with a near-infrared dye, which fluoresces in response to the nanoparticle’s short-wavelength light—a process called fluorescence resonance energy transfer (FRET). Despite the complicated BRET-FRET relay design, the particles work really well, says Hisataka Kobayashi, head of synthetic and radio chemistry at the National Cancer Institute in Bethesda, Maryland, who was not involved in the study. But the most important point, he adds, is that “they are all-organic compounds, so theoretically much less toxic.” This also helps to keep them in the body longer, thereby improving imaging time and quality for clinical applications.

Rao and colleagues have used the particles to image mouse lymph nodes and tumors. And by combining different types of near-infrared dyes with different polymers, Rao said, it should be possible to create a palette of self-luminescing nanoparticles for a variety of in vivo applications. (Nat Commun, 3:1193, 2012)