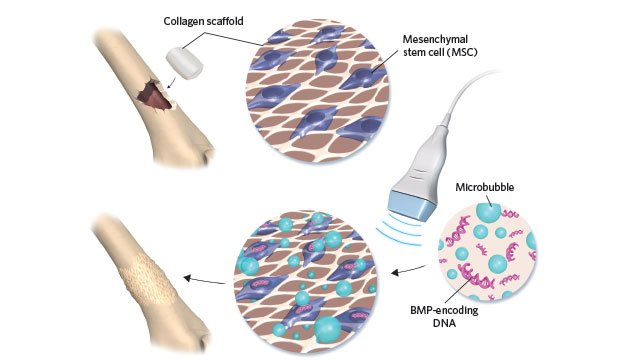 To repair a fractured pig tibia, researchers inserted a collagen scaffold that attracts mesenchymal stem cells (MSCs). Two weeks later, they injected a mix of microbubbles and DNA encoding bone morphogenetic protein (BMP) at the fracture site. Finally, they applied a pulse of ultrasound to encourage the MSCs to take up the DNA, and thus begin producing BMP. Within eight weeks, the bones were healed.© GEORGE RETSECK

Repairing limbs after serious injuries can be a challenge for orthopedic surgeons. If the loss of bone is too great, regrowth is impossible. Smaller fractures can also be problematic if bone growth is insufficient because of the advanced age or poor health of the patient.

The gold standard for treating such nonhealing fractures is autologous bone grafts—where a segment of healthy bone (normally harvested from the patient’s pelvis) is used to bridge the wound. But depending on the extent of the...

This strategy, too, has its pitfalls. “There are significant side effects,” including bone resorption and bone formation in soft tissues, says skeletal regeneration researcher Dan Gazit of Cedars-Sinai Medical Center in Los Angeles, possibly because BMP is given in large doses. Rather than administer the protein itself, then, perhaps physicians could deliver the underlying gene to cells, providing more-physiological levels of BMP at the site of injury, and less elsewhere in the body.

The viral vectors used to deliver such gene therapies have raised their own safety concerns, however. To overcome this obstacle, Gazit and colleagues employed a delivery mechanism called sonoporation—in which ultrasound is used to induce the oscillation of lipid-shelled, gas-filled microbubbles, causing them to punch tiny, reparable holes in cells through which the DNA can enter.

The researchers also employed a strategy to ensure the DNA was targeted to endogenous mesenchymal stem cells (MSCs), which are proficient at producing BMP. In the fractured tibias of pigs, the team inserted collagen scaffolds, known to attract MSCs, then waited two weeks (for maximal MSC recruitment) before injecting a mix of BMP-encoding DNA and microbubbles at the site of the fracture and applying a pulse of ultrasound. Eight weeks after a single dose of the gene therapy, the pigs’ fractures were mended, while those of control animals were not.

“[Gazit] has now got the proof of principle he needs,” says Mayo Clinic orthopedics researcher Christopher Evans, who was not involved in the study. “That’s really exciting.” (Sci Transl Med, 9: eaal3128, 2017)