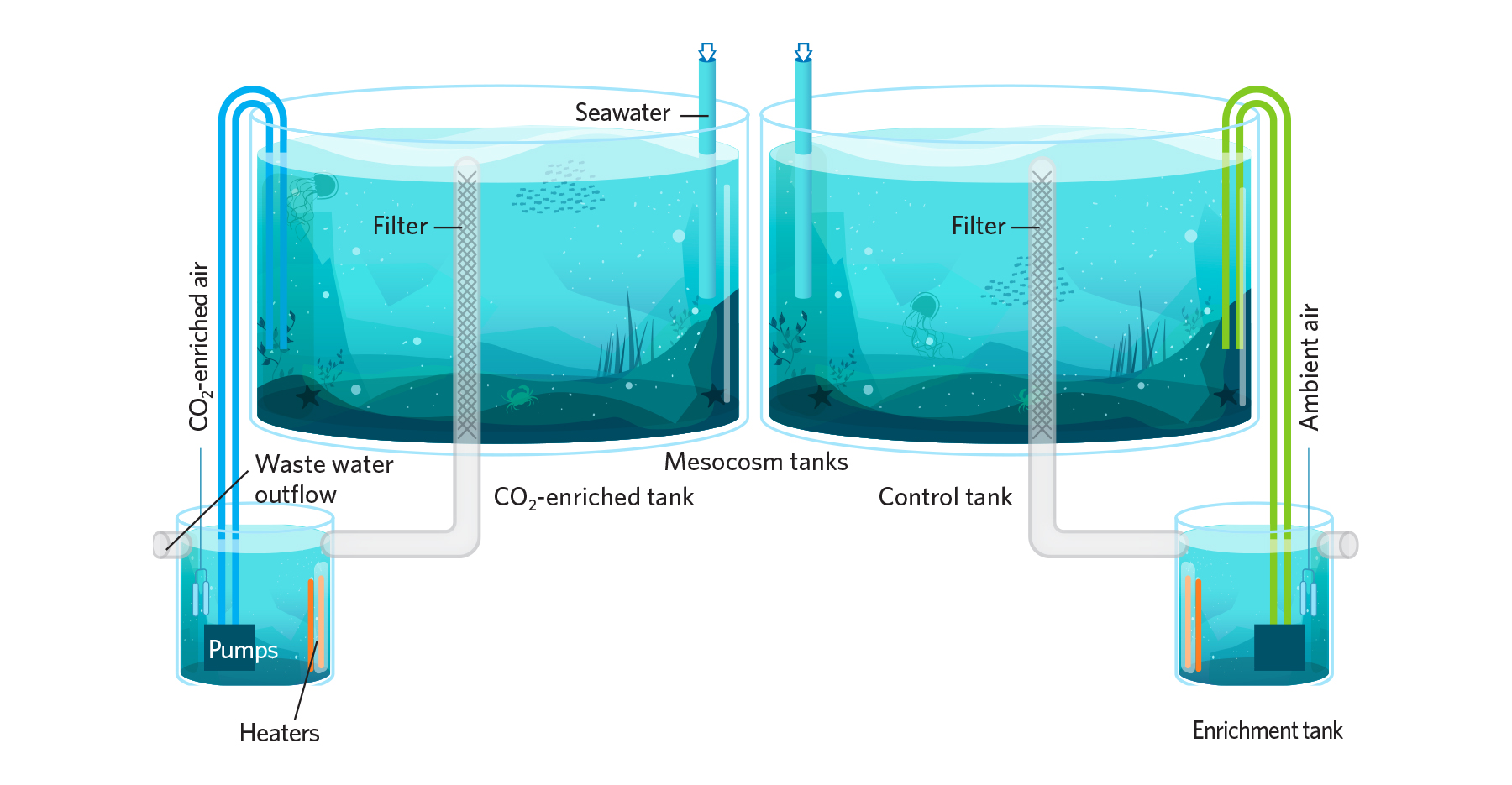 FUTURISTIC: Tanks containing seawater, sand, rocks, and animals can have their water temperature and acidity controlled to reflect current conditions (right) and those that may result from climate change. Seawater continually enters the mesocosm tanks and then circulates through enrichment tanks, where temperature and acidity are controlled, and returns to the mesocosms.
SEE FULL INFOGRAPHIC: WEB
The Scientist staff

Increasing levels of atmospheric carbon dioxide are thought to be acidifying and warming Earth’s oceans, causing significant changes to marine and terrestrial ecosystems around the world. But many forecasts of future changes to ecosystems have been based on simplified laboratory experiments that include few or even just a single species.

“Looking at individual organisms gives you a very isolated if not distorted picture, so to really understand how communities are responding to global change, you need to go to community-level experimentation,” says biological oceanographer Ulf Riebesell of GEOMAR Helmholtz...

Riebesell and marine ecologist Ivan Nagelkerken of the University of Adelaide in Australia are among the researchers now employing mesocosm experiments—a method that straddles the divide between field- and laboratory-based approaches to allow the study of naturalistic environments under controlled conditions.

While mesocosms themselves are not a novel concept, says Nagelkerken, “they have hardly ever been used in climate change research.”

Riebesell’s mesocosms consist of 2-meter-diameter, columnar polyurethane bags descending into and containing seawater but cut off from the surrounding ocean. Recently, he and colleagues have found that ocean acidification (via introduction of dissolved carbon dioxide) promoted herring larvae survival—possibly because phytoplankton biomass, a food source, increased. The finding runs counter to those of laboratory studies (Nat Ecol Evol, 2:836–40, 2018).

Nagelkerken’s mesocosms are 2-meter-diameter tanks, each containing 1,800 liters of seawater pumped in from the ocean, as well as rocks, sediment, and dozens of species of small fishes, large and small invertebrates, algae, and plankton. While Riebesell’s mesocosms represent the open-ocean environment, Nagelkerken’s recreate near-shore habitats. In studies published earlier this year, he and colleagues found that while ocean acidification alone has a positive effect on herbivores and carnivores, seawater warming, with or without acidification, caused the proliferation of cyanobacteria—which outcompete edible algae but aren’t a food source for most marine animals—and the subsequent collapse of the food web (Nat Clim Chang, 8:229–33; PLOS Biol, 16:e2003446).

“Such mesocosm experiments are important for testing higher-level ecological effects that might not otherwise be detected with simpler experimental designs,” says coral reef ecologist Philip Munday of James Cook University in Australia who was not involved in the studies.