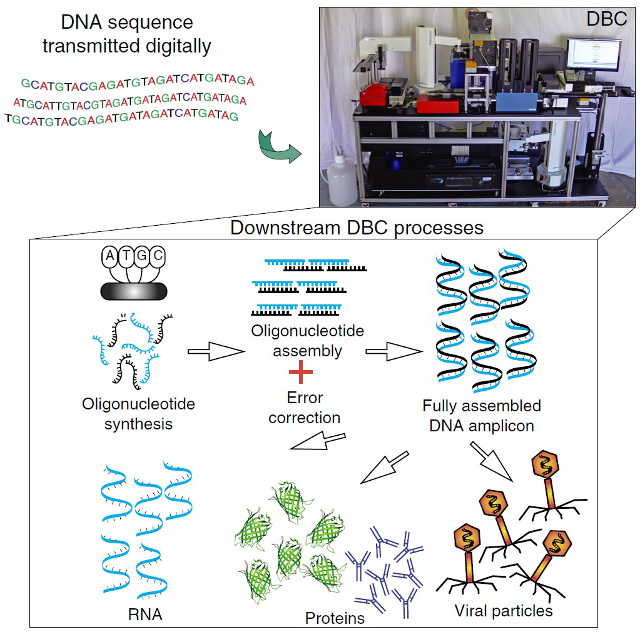 ON-DEMAND BIOLOGICS: DNA sequence data are transmitted digitally to the digital-to-biological converter together with instructions for desired output. The machine designs and manufactures appropriate oligos and synthesizes the DNA. Depending on the instructions, the DNA is then automatically transcribed into RNA, translated into protein, or assembled into larger molecules and incorporated into bacteria.K.S. BOLES ET AL., “DIGITAL-TO-BIOLOGICAL CONVERTER FOR ON-DEMAND PRODUCTION OF BIOLOGICS,” NAT BIOTECHNOL, DOI:10.1038/NBT.3859, 2017. IMAGE USED WITH PERMISSION FROM DAN GIBSON

Imagine a deadly virus emerging in a part of the world without the resources for vaccine development. Now imagine if researchers on the other side of the world could send local medics an effective vaccine by email.

Dan Gibson and Craig Venter of Synthetic Genomics in La Jolla, California, started to imagine such a scenario shortly after an avian flu outbreak in China in 2013. The company had just developed a prototype DNA synthesizer...

The process was quick, but it could certainly have been quicker, Gibson says. “I thought, ‘Why can’t we just have an instrument that can be strategically placed anywhere in the world, preloaded with the raw materials, and I email the sequence to the instrument and it does everything for me?’”

Now, that’s exactly what Gibson, Venter, and their team have built. Their new digital-to-biological converter (DBC) can, upon receipt of a DNA sequence, prepare appropriate oligos, carry out DNA synthesis, and then, as required, convert that DNA into a vaccine, or indeed into any RNA molecule or protein.

The team has so far programmed the DBC to make fluorescent proteins, antibody polypeptides, an RNA virus (H1N1 influenza), and an influenza vaccine. They’ve also made a full bacteriophage—by synthesizing the DNA and automatically transforming it into E. coli, which supports the phage’s production.

“The authors paint this future where one might be able to, in a completely digital and automated fashion, go from DNA sequence to functional output,” says Michael Jewett, a chemical and biological engineer at Northwestern University who was not involved in the research. “Granted the prototype is a little bulky . . . but the idea that you could connect all these pieces together without human intervention is exciting.” (Nat Biotechnol, doi:10.1038/nbt.3859, 2017.)