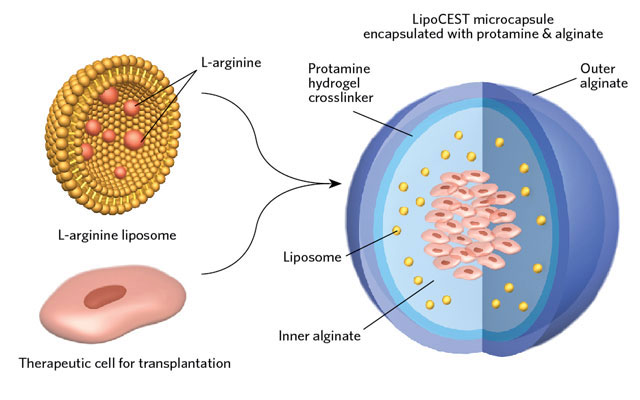 TINY pH DETECTORS: The team encapsulated live liver cells together with a liposome containing L-arginine inside a hydrogel microcapsule before transplantation into mice.GEORGE RETSECK 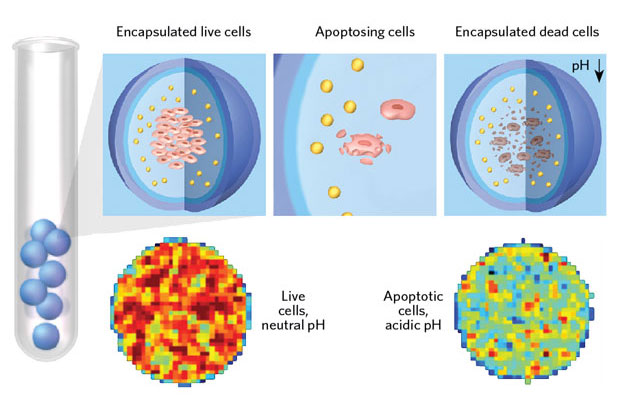 MONITORING CELL VIABILITY BY MRI: When cells die, the acidity within the microcapsule increases, changing the contrast of the L-arginine liposomes. Using CEST-MRI the researchers estimated a 33 percent drop of signal when all of the 2 million transplanted cells died. GEORGE RETSECK; MRI IMAGES COURTESY OF MICHAEL MCMAHONEncapsulating therapeutic cells inside hydrogel microparticles before transplanting them into the body has become a promising approach for cell-based therapies, such as injecting new pancreatic islet cells into diabetic patients whose own cells have stopped producing insulin. The hydrogel not only keeps the cells at the injection site, it spares them from attack by the host’s immune system.

One hindrance to the technique’s more widespread clinical application, however, has been the inability to safely assess...

McMahon’s team had previously shown that L-arginine is an excellent contrast agent—a substance that enhances visualization—for a version of MRI called chemical exchange saturation transfer (CEST). The degree of contrast exhibited by the chemical depends on the pH of its surrounding environment. So McMahon devised a sensor out of lipid nanoparticles that contained L-arginine.

The team tested the particles’ cell death–detection ability by encapsulating them, along with liver cells, in hydrogel microcapsules, and transplanting them into mice. When the cells died, the local acidity increased, changing the nanoparticles’ contrast signal. The researchers found that the death of 100 percent of 2,000,000 transplanted cells resulted in a 33 percent drop in CEST signal strength.

“They have taken something as simple as an amino acid and some phospholipids and . . . have created something that allows the monitoring of cell viability by MRI,” says Willem Mulder of Mount Sinai School of Medicine in New York City. “It’s a very innovative and elegant method.” (Nat Mater, 12:268-75, 2013)