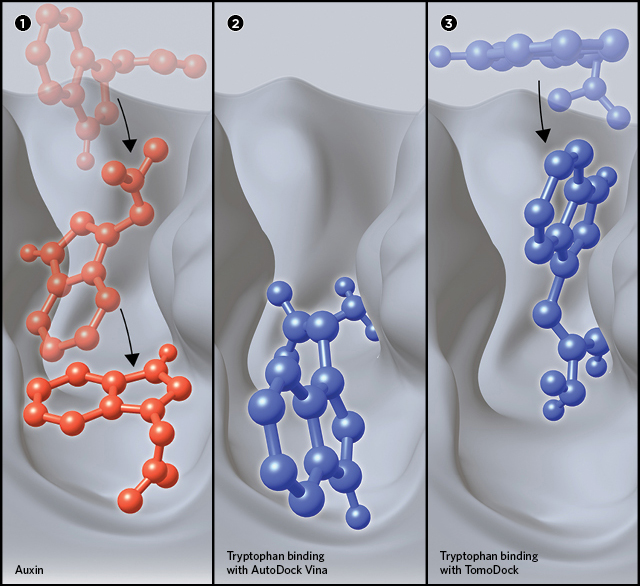 MOLECULAR SPELUNKING: AutoDock Vina evaluates a receptor’s entire binding pocket at once to find a docking site (lowest-energy binding) for a ligand of interest. The deepest part of the pocket (the actual binding site for auxin shown at the bottom of (1) naturally has a low energy requirement, and this is where, in the case of tryptophan (2), the software suggests a docking site. But by forcing the software to move in incremental steps—starting at the mouth of the pocket and moving inward—TomoDock finds an interaction of tryptophan with residues farther up the pocket (3) that prevents deeper entry. In the case of auxin, however, TomoDock finds the same binding site as that found using AutoDock Vina (step-wise progress of TomoDock shown in (1).© GEORGE RETSECK

Auxins are a family of small-molecule hormones that control growth and development processes in plants. They are also components of widely used...

Napier’s team uses docking software to simulate auxin binding. But there’s a problem: the software also allows molecules to dock that, Napier says, are known not to bind in reality—such as auxin’s close relative tryptophan. “Getting false positives out of docking [analyses] is absolutely part of the deal,” he says. “Docking is not a perfect science.”

To reduce such permissiveness, Napier and his colleagues have written additional computational code for a popular docking program, AutoDock Vina. For receptors with deep binding-site pockets (like that of the auxin receptor), the new code mimics the molecule’s natural passage by searching for the docking site in a sequence of 0.1-nanometer steps.

Drawing an analogy with a cave, Ning Zheng of the University of Washington says, “The conventional [docking] method just looks at whether a child or adult can be accommodated by the cave interior, but if that cave is separated from the outside by, let’s say, a narrow cleft, then . . . maybe it turns out the adult is too big to pass [through].”

Restriction of a molecule’s access may not be due to size, but to interactions with residues on the “cave” walls as it enters—which is the case for tryptophan, Napier’s team has now discovered. Without simulating a molecule’s passage, as per the new method, called TomoDock, such interactions can be missed, Napier says. (Open Biology, 6:160139, 2016)