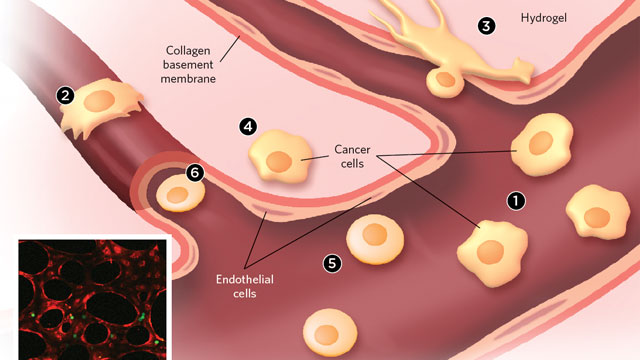 WAYS OUT: Within a day of culturing in the microvascular device, cells can be found spread but contained within the lumen (1), extravasated and adhered to the outside of the lumen (2), penetrating the endothelial barrier and contacting the hydrogel matrix (3), extravasated and migrated away from the lumen (4), adhered within the lumen and circular in morphology (5), and occluded in small vessels (6). Inset: Zoomed-out view of the microvessels (red) and tumor cells (green).© GEORGE RETSECK; INSET COURTESY OF MICHELLE CHEN, INTEGR BIOL, 5:1262-71, 2013

When a cancer becomes metastatic, its cells travel from the original tumor site via the blood. Although the process of intravasation—cancer cells entering the bloodstream—has been well studied, how they exit, or extravasate, from blood vessels is less clear. Part of the problem is that previous extravasation assays have either been physiologically relevant, as in the case of using live zebrafish, or high throughput, as with microfluidic devices, but not both. Roger Kamm’s team at the Massachusetts Institute of Technology has now come up with a microfluidic device that incorporates natural vascular structures.

Previous microfluidic devices have used monolayers of endothelium—the cells that line blood vessels—to mimic the vascular environment, says Michelle Chen, lead developer of the new system. But these cells become more permeable to tumor cells when grown in a layer. Chen therefore grew her cells in 3-D microvascular networks that closely mimic natural blood vessel structure. “The permeability we’ve been able to achieve is of the same order of magnitude as what we would find in vivo,” she says.

While in vivo analysis might be desirable, it does not allow for the kind of rapid experimentation achievable with the new device. “This technique is easy to use and gives one the control to change cell type, cell density, matrix properties, et cetera,” said Muhammad Zaman, a biomedical engineer at Boston University.

Chen has already used the device to compare the extravasation abilities of two types of cancer cells and has shown that the inflammatory cytokine TNF-a increased the rate of tumor cell extravasation. (Integr Biol, 5:1262-71, 2013) 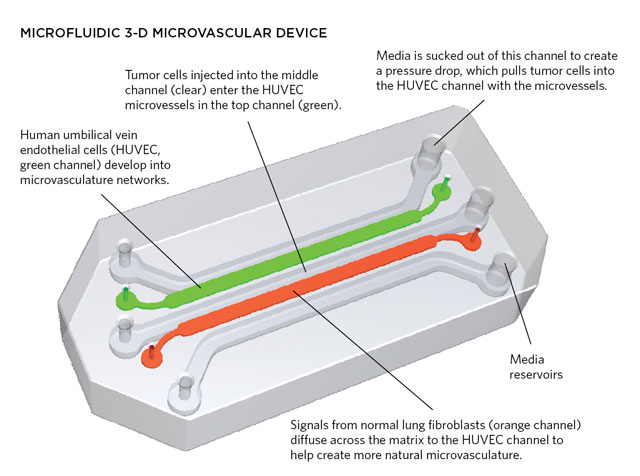 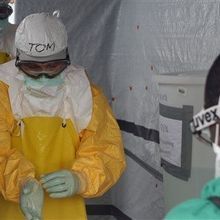