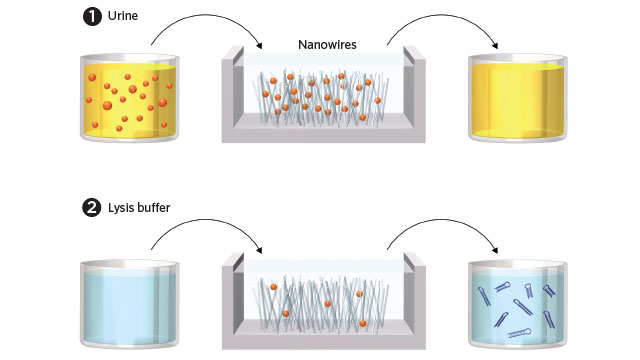 PEE IN, MICRORNAs OUT: (1) A small volume of urine is introduced into the microfluidic device, where positively charged zinc oxide nanowires attract and bind negatively charged exosomes. (2) Lysis buffer is introduced to the device to break open the exosomes and free the microRNAs, which are then collected for sequence analysis.

Exosomes are tiny membrane-bound packages that are released from practically every cell type and found in a wide range of body fluids. Containing RNAs, proteins, and other cell components, they are believed to be involved in communication between cells, and there’s evidence that their abundance and content may change with disease state. Consequently, there is a growing interest in collecting and analyzing these vesicles for diagnostic purposes. Researchers who are interested in the diagnostic potential of microRNAs, for example, are especially keen to collect exosomes because the RNAs they contain...

“They are packed with important information,” says Kai Wang of the Institute for Systems Biology in Seattle. But the problem is, “we actually don’t have a good way to isolate them.” This limits both basic research on exosomes and their clinical use, he explains.

The most commonly used method for extracting exosomes from body fluids is ultracentrifugation. But this requires large volumes and yields only small quantities, explains Johanna DiStefano of the Translational Genomics Research Institute (TGen) in Phoenix. A new device, developed by Takao Yasui of Nagoya University in Japan and colleagues, instead uses zinc oxide nanowires to isolate the vesicles. “Not only do they use a much lower volume . . . but they’re getting a much higher exosome collection from that smaller volume,” says DiStefano, who was not involved in the work. “It outperforms current methods.”

The nanowires are approximately 100 nm wide and 2,000 nm long, and are held in place in a microfluidic chamber by a silicon-based organic polymer. The wires create a large, positively charged surface area, says Yasui, which the group hypothesized would be “a powerful tool” for collecting negatively charged exosomes.

They were right. Passing just one ml of urine through the device, followed by one ml of lysis buffer, enabled the team to collect and sequence small RNAs that yielded approximately threefold more microRNA species than the amount obtained by ultracentrifugation of 20 times more urine.

The team went on to analyze exosomes from healthy human subjects and patients with various cancers, and found differences in microRNA profiles. More tests will be needed to find out whether these differences are reproducible and informative, says DiStefano, but she adds the study is “a step in the right direction.” (Sci Adv, 3:e1701133, 2017)