Biofilms are ubiquitous coatings made up of microbes and secreted proteins. They can stick to our teeth, our sink drains, medical equipment, and myriad other man-made and natural surfaces. In health care, biofilms are often difficult-to-treat pests, but MIT electrical engineer Timothy Lu is hijacking their excellent self-forming abilities for potential beneficial uses.

E. coli secrete a protein known as CsgA, a building block of the so-called curli fibers that form an extracellular matrix-like structure in the biofilm. Lu’s team genetically engineered bacteria with a modified CsgA protein that could stick to gold particles. Once added to the culture media, the gold particles incorporated into the curli fibers when a small molecule signal was also present, giving the bacterial biofilm the ability to form gold nanowires or nanorods and hold an electrical charge. The curli fibers can also incorporate tiny semiconductors called quantum dots, which impart optical properties.

“The cleverness of this approach is using bacterial communities as ‘smart’ and adaptive material templates,” says Ahmad Khalil, a biomedical engineer at Boston University who was not involved in the study. “It’s an on-demand manufacturing system.”

Lu’s nanowire biofilms are a proof-of-concept demonstration, but he sees this approach of orchestrating biofilm composition and behavior as a way to create functional devices that can self-heal, for instance, or to build solar cells out of photosynthetic organisms.

Although the E. coli strains used here are not virulent, many safeguards are being developed, including kill switches that order the organism to stop biofilm formation or to commit suicide in all environments except the laboratory. Genetic instructions could also prevent mating and gene transfer with other organisms. “When these biomaterials are ultimately used on larger scales, all of these approaches will be important,” says Lu. (Nature Materials, doi:10.1038/nmat3912, 2014.) 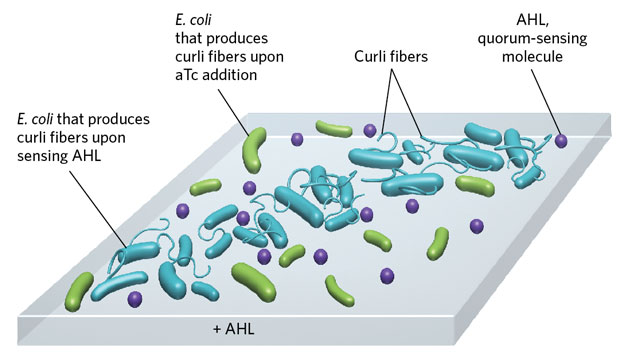 QUORUM SENSOR: Two populations of engineered E. coli each express a different version of CsgA, a building block of the curli fibers that form part of a biofilm’s extracellular matrix. One population (blue) produces CsgA and curli fibers when a quorum sensing molecule, AHL (purple), is added to the medium.© GEORGE RETSECK

NANOROD BUILDER: The second population of E. coli (green) produces curli fibers from a modified form of CsgA when a small signaling molecule, aTc (pink), is present. The modified CsgA contains a histidine tag that can attach to gold nanoparticles. As the biofilm develops, the aTc-sensing cells assemble a gold nanorod capable of conducting electricity. By changing the ratios of each type of E. coli, or the amount of AHL or aTc, different patterns of biofilms with different properties can result. © GEORGE RETSECK