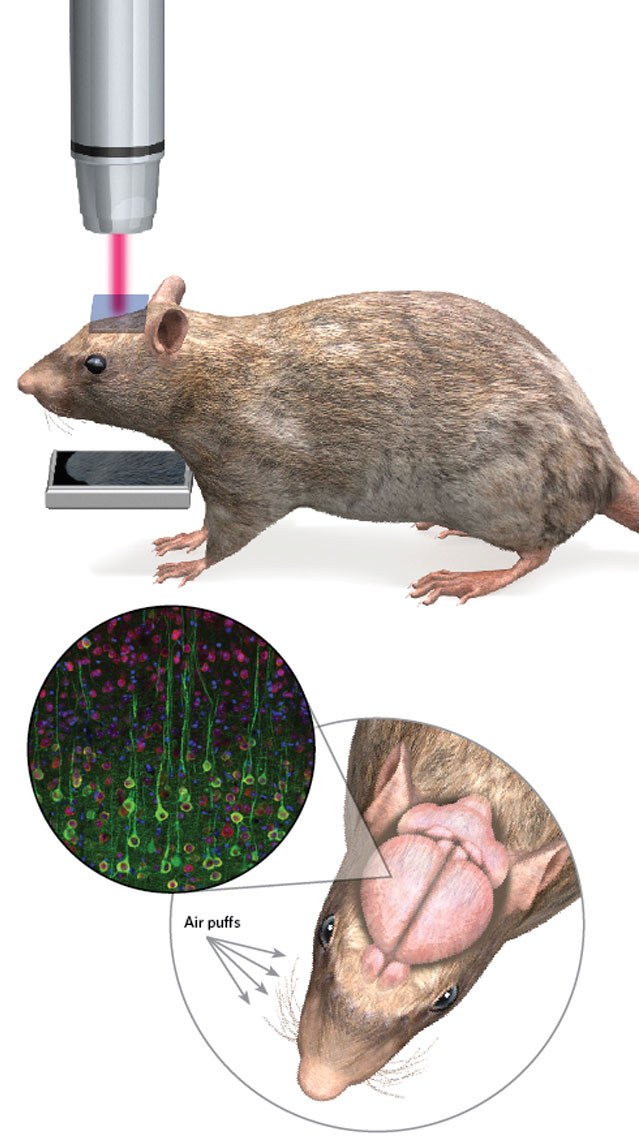 CAUGHT IN THE ACT: Feng and colleagues recorded neuronal activity in mice engineered to express the calcium indicator GCaMP3 or GCaMP2.2 upon neuronal activation. Previously inserted cranial windows located over the motor cortex allowed the researchers to use fluorescent microscopy to examine the activation of specific neuron populations when the animals’ whiskers were stimulated by puffs of air. Green signals neuronal GCaMP3 expression; red marks neurons; and blue marks the nuclei of all brain cells.GEORGE RETSECK; NEURON IMAGE COURTESY OF QIAN CHEN AND GUOPING FENG

Observing the activity of specific neuronal circuits in the living brain can provide insight into how the brain functions normally and how it is affected by disease, psychological disorder, or injury. For that purpose, Guoping Feng, from the Massachusetts Institute of Technology, and colleagues have engineered transgenic mice whose neurons glow green when activated.

Neuronal activation leads to a rapid spike in intracellular...

To get around these shortcomings, researchers have developed genetically encoded calcium indicators such as GCaMP—a calcium-binding peptide linked to a green fluorescent protein. “There has been an evolution of the technique, in which people have made brighter and brighter genetically encoded reporters and found various ways to insert them in vivo—viral vectors, transgenes, etc.,” says Joshua Sanes of Harvard University, who was not involved in the new study.

Feng and colleagues have come up with “another good tool,” says Sanes. They’ve created two transgenic mouse lines that express GCaMP2.2c and GCaMP3—improved, brighter versions of GCaMP—specifically in selected types of neurons. These mice enable the observation of both spontaneous neural network activation—in awake but unstimulated animals—and stimuli-induced activation.

Sanes, who studies vision, plans to use Feng’s mice to look for patterns of neuronal activity in response to visual stimuli. Feng, meanwhile, plans to cross the mice with mouse models of autism and obsessive-compulsive disorder to see how neuronal pathways are affected in these conditions. (Neuron, 76:297-308, 2012)