Human brain cells use about one-fifth of the body’s energy. Scientists assume that neurons are energy hogs, but know little about how they manage those energy demands, says Timothy Ryan, a biochemist and neuroscientist at Weill Cornell Medical College. The energy needs of presynaptic nerve terminals must be addressed locally, as the synapse can be as far away as one meter from the cell body. Together with colleagues, Ryan has engineered an optical reporter system called Syn-ATP that, when expressed in neurons, can directly measure the number of ATP molecules specifically located at presynaptic nerve terminals.

“Visualizing cellular biochemical processes is one of the most difficult and exciting areas of neurobiology, and this technique is a successful example of this approach,” says neurobiologist Pietro De Camilli of Yale University. “It’s a powerful new tool.”

Using the reporter in cultured rat hippocampal cells, the researchers found that measured levels of...

Ryan is now using this quantitative system to study synaptic dysfunction that may be occurring in neurodegenerative diseases, such as Parkinson’s and Alzheimer’s. “We are now trying to see the roots of communication of the action potential driving [the] synthesis of ATP and whether this communication is decaying in diseases and in aging.” (Cell, 156:825-35, 2014) 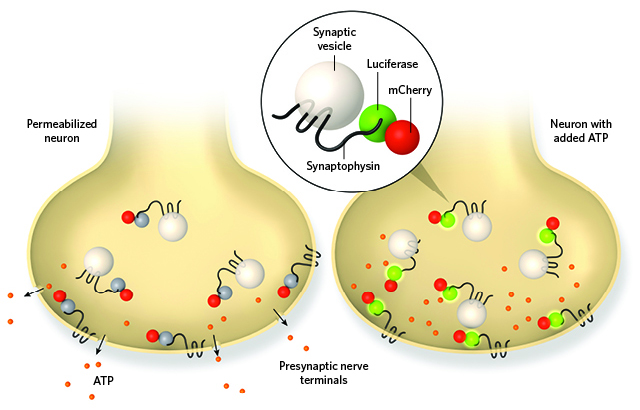 CALIBRATION: The ATP reporter consists of an mCherry fluorescent protein (red) and a luciferase enzyme (green), fused to the C-terminus of synaptophysin, a synaptic-vesicle protein that localizes the reporter to the presynaptic terminals of neurons.
To calibrate the reporter and determine the amount of signal that corresponds to a particular concentration of ATP, a neuron’s plasma membrane is permeabilized with the bacterial exotoxin streptolysin-O, resulting in holes large enough for ATP to escape (left). ATP depletion leaves the luciferase inactive but maintains the red fluorescence from mCherry. The addition of a defined amount of exogenous ATP turns on luciferase (right). This allows researchers to determine the ratio of luciferase luminescence to mCherry fluorescence, which correlates to the amount of ATP present in the cell. © GEORGE RETSECK