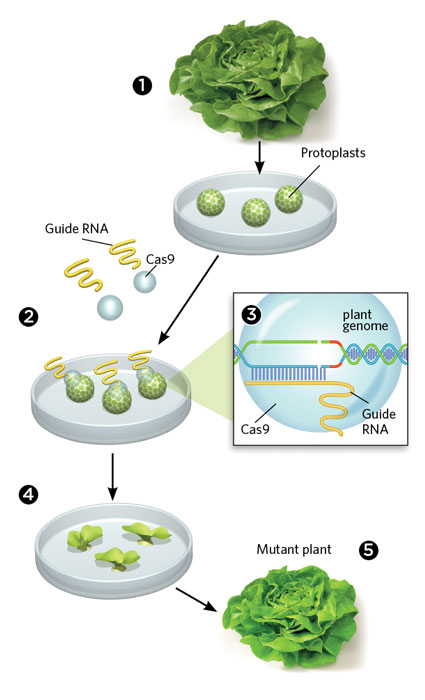 PLASMID-FREE EDITING: To mutate a specific gene of interest in a plant (lettuce shown here), scientists first grow protoplasts—plant cells lacking a cell wall (1). Preassembled CRISPR complexes, including a tailor-made stretch of guide RNA and the nuclease Cas9, are introduced into the protoplasts (2). The complex homes in on the target gene and cuts the DNA at a locus specified by the guide RNA (3). Protoplasts are then grown in clumps called calli (4), which are regenerated into a mature, genetically modified specimen (5).
View image larger: WEB© GEORGE RETSECK; WIKIMEDIA COMMONSThe ongoing quest to increase the yield of crops and produce varieties resistant to disease, drought, and pests has been aided by the development of gene-editing technologies. These days, probably the most commonly used gene-editing approach in labs is the CRISPR/Cas9 system, in which a guide RNA—specially designed to match part of the sequence of...

To date, researchers have been using DNA plasmids, both naked and inside infecting bacteria, to transfer Cas9 and guide RNAs into plant tissues and cells. However, says geneticist Jen Sheen of Harvard Medical School, this approach runs the risk of creating additional mutations—either from the integration of the plasmid itself into the plant genome, or from the persistence of the encoded gene-editing factors, which can “continue to make mutations.”

Sunghwa Choe of Seoul National University and colleagues have therefore devised a technique that avoids the use of plasmids altogether. They preassemble the Cas9 protein and guide RNA complex in vitro and then mix the complex with polyethylene glycol, which allows direct transfer by endocytosis into protoplasts—plant cells that have had their cell walls removed.

The edited protoplasts can then be cultured into small clumps of plant tissue called calli, from which a mature plant can be regenerated. Choe and colleagues have created genetically modified lettuce plants using this approach and have also edited genes in the protoplasts of three other species.

Avoiding the use of plasmids should not only prevent any additional unwanted DNA damage, but might also allow the genetically modified plants to skip regulatory oversight, explains Choe. (Nature Biotechnol, 33:1162-64, 2015)