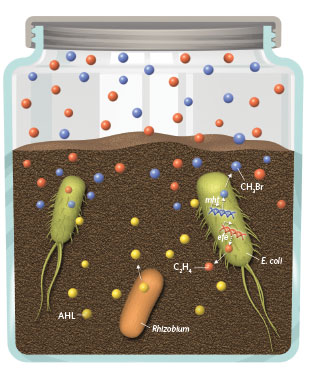 E. coli bacteria are genetically engineered to produce the EFE protein constitutively and MHT in response to the bacterial communication molecule AHL. The presence of the E. coli in the soil, and the levels of AHL, in this example produced by Rhizobium bacteria, can then be detected non-disruptively using headspace gas chromatography—with the ratio of MHT-produced CH3Br to EFE-produced ethylene reflecting the concentration of AHL.
See full infographic: WEB © GEORGE RETSECK

Fluorescent reporter proteins have revolutionized gene expression analysis, but their use is limited to more-or-less transparent systems, such as single cells or zebrafish larvae. For researchers studying organisms that live in soil, using these visual reporters is infeasible in any but the thinnest of samples, says environmental and synthetic biologist Jonathan Silberg of Rice University.

“We can analyze cultured microbes in exquisite detail,” adds biogeochemist Caroline Masiello, also at Rice. “But the question...

Ecologists often use headspace gas analysis to measure common bacterially produced gases, such as carbon dioxide and methane, without disrupting the soil or sediment sample. If bacteria could be genetically engineered to produce unusual gases, the team reasoned, they could be readily detected and analyzed by this technique, which involves quantifying mixtures of gases in closed containers.

The team identified two potential reporter genes—one from a plant, Batis maritima, and one from the bacterium Pseudomonas syringae—encoding enzymes, MHT and EFE, respectively, that synthesize methyl bromide and ethylene. The researchers then cloned the genes into a plasmid, placing efe under the control of a constitutive promoter and mht under a promoter responsive to acylhomoserine lactone (AHL), a bacterial signaling molecule key in quorum sensing. The plasmid was transferred into Escherichia coli.

In gas from soil samples containing the engineered E. coli, the team could detect both the bacteria’s presence (via ethylene) and the production, or destruction, of AHL (via methyl bromide). The system, which also worked in the sediment-dwelling bacterium Shewanella oneidensis, could be used as-is for studying bacterial communication, or could be engineered to respond to other environmental signals, such as pollutants.

“This is a fascinating new technique,” says University of North Carolina at Chapel Hill microbial biogeochemist Carol Arnosti, who was not involved with the project. “[It] promises to revolutionize the manner in which we investigate the activities and interactions of bacterial communities in soils.” (ACS Synth Biol, 7:903-11, 2018)