There are many reasons for analyzing the gene expression profiles of individual cells rather than a pooled population. But scaling up single-cell transcriptomics to analyze multiple cells in parallel has been challenging. “One can only analyze a few, or maybe 100 cells at a time,” says Donald Zack of Johns Hopkins Hospital in Baltimore.

“There’s a need for techniques that are unlimited in terms of the number of cells,” says Marc Kirschner of Harvard University. In some instances you need increased statistical power, he says. “But also, it’s often the case that you’re looking for a needle in a haystack”—that is, extremely rare cells.

Kirschner’s laboratory and that of Steve McCarroll, also at Harvard, have now independently broken the scale barrier for single-cell analyses. And surprisingly, the teams achieved their feats in similar ways despite only learning of each other’s approach well along in development. Both groups used microfluidic...

“The innovation was using an aqueous-oil emulsion,” says Zack, describing the oil-suspended droplets that essentially form hundreds of thousands, even millions, of tiny temporary test tubes. “Instead of needing a well or a little spot for each cell, now they could, by many orders of magnitude, increase throughput,” he says. Such droplets have been used for single-cell PCR, but the new techniques are the first to apply the technology to transcriptomics.

Kirschner’s team has used its technique, called inDrop, to study variations in seemingly uniform populations of mouse embryonic stem cells, while McCarroll’s team, using the Drop-seq approach it designed, has identified known and novel cell types in the mouse retina. As both researchers assert, however, the number of possible applications is vast. (Cell, 161:1187-1201, 2015 and Cell, 161:1202-14, 2015) 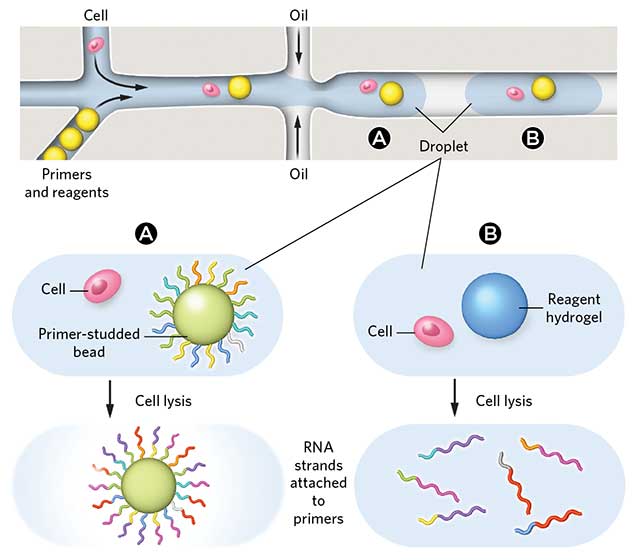 (1) Droplet formation: Primers, reagents (for lysing cells and performing reverse transcription), and a cell are packaged into an oil droplet. (2) Reaction: In the Drop-seq method (A), the cell is lysed and mRNA strands bind to barcoded primers stuck to a resin bead. The droplet breaks up and the RNA is then reverse transcribed.
The inDrop approach (B) uses a hydrogel microsphere to ferry reagents and barcoded primers into the droplet. After the cell is lysed, reverse transcription generates cDNAs with the tagged primers.© GEORGE RETSECK

(3) Library construction: The cDNA is amplified to create an RNA library, then sequenced.© GEORGE RETSECK