A common way to visualize single DNA or RNA molecules in cells is to insert into the target molecule multiple copies of a sequence to which a fluorescently tagged protein can bind. The more copies of the sequence, the more bound fluorescent proteins, the brighter the signal. Marvin Tanenbaum, a postdoc in Ronald Vale’s lab at the University of California, San Francisco, thought to himself, “Why don’t we do this for proteins?” So he did.

Prior to Tanenbaum’s technique, called SunTag, the main way to visualize a protein in cells was to recode its sequence to contain a fluorescent domain—such as green fluorescent protein (GFP). Proteins with a single GFP domain were often too dim for some types of fluorescent microscopy, however, and adding more GFP domains didn’t always work—the proteins became unfeasibly large.

With SunTag, proteins of interest are instead recoded to contain multiple copies (up to 24) of...

“It’s a relatively simple idea—that’s the beauty of it,” says Robert Singer of Albert Einstein College of Medicine in New York City. “But it wasn’t simple to effect,” he says, referring to the rigorous tweaking and testing Tanenbaum and his colleagues had to do. “They clearly put a lot of effort into optimizing the system.”

But it was worth it, because not only can SunTag be used to make proteins glow more brightly, it can also locally attract other types of proteins to the epitope. For example, Tanenbaum has used it to recruit multiple transcription factors to a DNA-binding protein to ramp up expression of a gene. (Cell, 159:635-46, 2014) 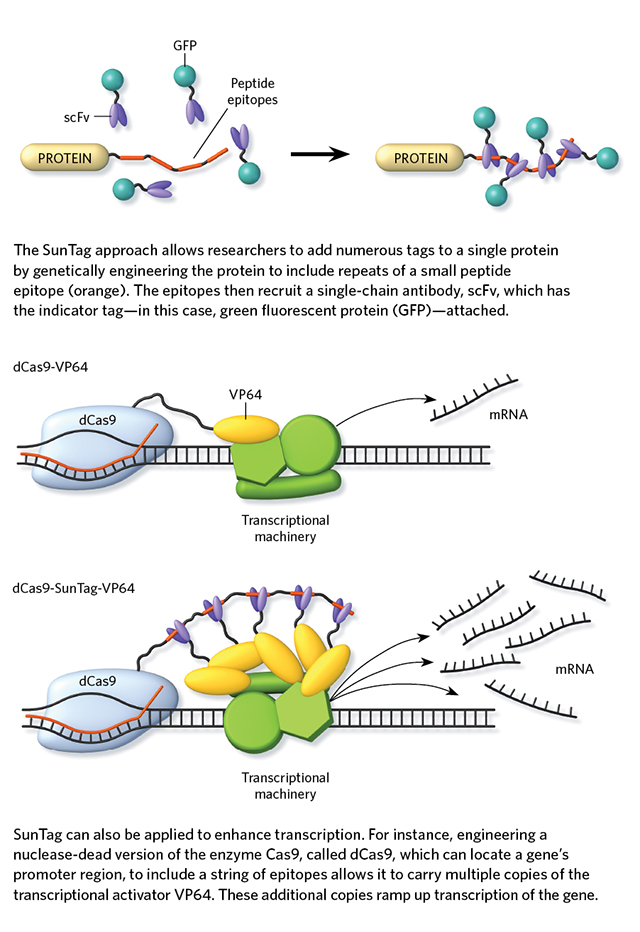