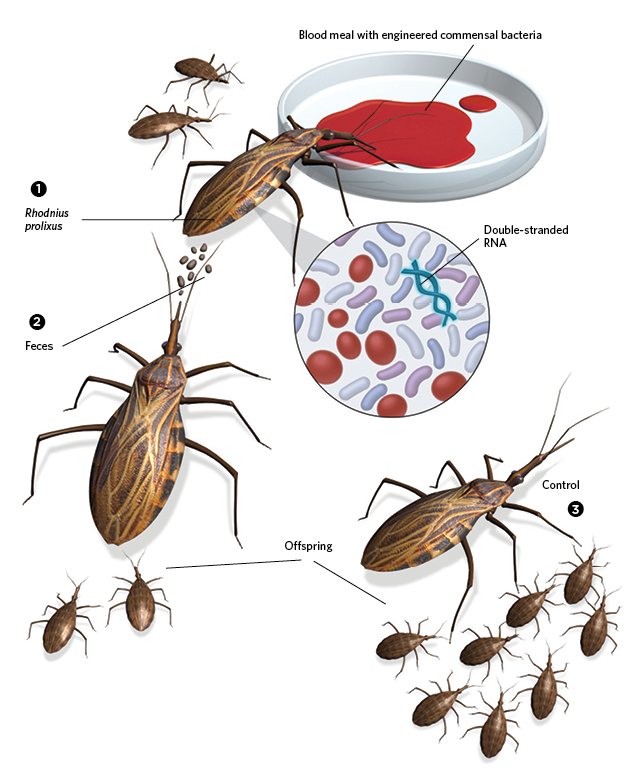 EATING UP INTERFERENCE: To control reproduction in Rhodnius prolixus, which spreads Chagas disease, researchers introduce double-stranded RNA via bacteria mixed into the insect’s food. The blood meal contains commensal gut microbes that have been genetically engineered to express the RNA, which blocks the expression of a gene involved in producing offspring (1). Such RNA interference can spread to other individuals who eat the treated insect’s feces (2). Control animals produced roughly 70 percent more offspring than treated ones (3).
See full infographic: WEB© GEORGE RETSECK

RNA interference (RNAi)—the use of a double-stranded RNA (dsRNA) to trigger the destruction of a corresponding gene’s messenger RNA—is a popular method for ascertaining gene function. But for entomologists there’s a problem. “We have a major challenge with insects in terms of getting an effective and efficient delivery mechanism,” says Owain Edwards of the Commonwealth Scientific and Industrial Research Organisation (CSIRO) in...

Current dsRNA delivery methods include ingestion and injection, but the primary issue with both of these is the transient availability of dsRNA once inside the insects—thus necessitating a continuous supply. Injection can also cause trauma, especially to smaller insects.

To prolong RNAi’s effects in insects and to develop a gentler mode of delivery, Paul Dyson, Miranda Whitten, and colleagues at Swansea University in the U.K. enlisted the help of the animals’ own symbiotic gut bacteria. They engineered a microbial species that resides in western flower thrips (Frankliniella occidentalis), a widespread crop pest, to express custom dsRNAs, then mixed the bacteria with the insect’s food.

Once the microbes colonized the hosts’ guts, the dsRNA released from the bacteria suppressed a gene essential for thrip survival, and many insects died. The researchers used the same approach to successfully block a key fecundity gene in a major Chagas disease vector, Rhodnius prolixus, and the number of offspring subsequently declined. In the latter example, the bacteria—different from those deployed in thrips—stably expressed the dsRNA, persisted in the insects’ guts for many months, and could suppress the target gene in other R. prolixus members by spreading to individuals via coprophagy, eating one another’s poop.

Such a sustained RNAi effect could be valuable for insect-control strategies, says Dyson. Angela Douglas of Cornell University says the technique “enormously expands the potential for RNAi in insects.” (Proc R Soc B, doi:10.1098/rspb.2016.0042, 2016)