NEWBORN PROTEINS: Researchers can spot translation in progress by the combined presence of fluorescent tags that stick to newly formed peptides (green) and their corresponding mRNA (pink).Cell, 165:990-1001, 2016Sixty years ago, Francis Crick proposed the central dogma of cell biology: DNA makes RNA makes protein. Back then, watching that sequential process in actual living cells no doubt seemed the stuff of science fiction.

But by 1996, researchers had figured out a way to view individual DNA loci in live cells. They engineered the cells’ genomes to contain tandem repeats of a specific nucleotide sequence, introduced green fluorescent proteins that would bind to the repeats, and observed the resulting cluster of fluorescent proteins—which appeared as a bright spot in the nucleus—under the microscope.

Shortly afterwards, scientists came up with a similar trick for visualizing single mRNA molecules: fluorescent antibodies were targeted to a string of repeated stem-loops,...

“You had an RNA being born from a particular locus of DNA—we could see where that was, and we could track the RNA out [of the nucleus],” says Tim Stasevich of Colorado State University. But synthesis of the protein itself was still unobservable, he adds. “You could say, it got lost in translation.”

More than a decade later, Stasevich and colleagues, alongside three independent groups, have succeeded in devising techniques for visualizing single-molecule translation in living human cells. “The fact that you have four labs working on this is a testament to how hot the topic is,” he says.

Stasevich’s group engineered expression vectors that produced an mRNA containing stem-loop epitopes and encoding proteins in which the first few hundred amino acids formed a peptide domain of repeated epitopes called FLAG-tags. This domain, which the team dubbed “the spaghetti monster,” binds multiple FLAG-specific fluorescent antibodies that are injected into the cell, while the mRNA binds its own fluorescent antibodies. Thus, both the mRNA and its newly forming protein are observable at once (Science, 352:1425-29, 2016).

The techniques of the other three groups—led by Robert Singer of Albert Einstein College of Medicine, Marvin Tanenbaum of the Hubrecht Institute in the Netherlands, and Xiaowei Zhuang of Harvard University—used either the same or similar stem-loop epitopes for mRNA detection as Stasevich, but made use of a system called SunTag, developed by Tanenbaum in 2014, for detecting the proteins’ translation. SunTag, like the spaghetti monster, is an array of epitopes that bind fluorescent antibodies, but SunTag antibodies are encoded in a separate genetic construct, rather than injected into the cell.

Introducing antibodies into a cell “can be challenging,” admits Stasevich, “so I think that’s definitely one of the advantages of the SunTag [method].” However, a benefit of injecting rather than encoding antibodies, he says, is that it’s easier to control the amount of antibody—and, therefore, to get a good signal with little background. In addition, Stasevich’s system allows researchers to “image the proteins not just in one color but two,” he says. Indeed, by encoding a different spaghetti monster domain (containing epitopes called HA-tags) in a second mRNA, the team observed two different translation events in the same cell. 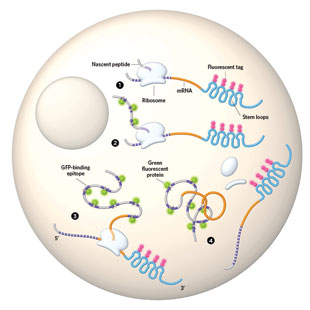 TRANSLATION ORIENTATION: Four independent teams of researchers have designed methods to observe translation in living cells, all based on the same basic approach. They engineered an mRNA to fold repeatedly into so-called stem loops in its 3’ untranslated region (blue). A fluorescent protein (pink) binds to these loops to allow for mRNA tracking. To observe the newly formed peptide, the researchers built in repeated peptide sequences (purple) that bind green fluorescent protein (green).
See full infographic: WEB © GEORGE RETSECK

Aside from a handful of minor pros and cons, the techniques all work on a similar principle, and, importantly, “they provide insights and answers to questions that wouldn’t have been possible by biochemical means,” says translation researcher Nahum Sonenberg of McGill University who was not involved in any of the studies. The ability to look at individual mRNA dynamics is a “big advance,” he adds.

The groups examined the translation kinetics for individual mRNAs and found that translation initiated roughly twice a minute and that elongation proceeded at 3 to 10 amino acids per second. Singer’s crew also found evidence that, at least in neurons, translation proceeds in bursts of activity followed by inactivity—as has been described for transcription (Science, 352:1430-35, 2016). Zhuang’s group showed how environmental stresses suppress translation and how the dynamics of translation vary depending on subcellular location (Cell, 165:990-1001, 2016). And Tanenbaum’s team observed that individual mRNAs from the same gene in the same cell can vary dramatically in their translation efficiency, with some being practically silent and others translating robustly (Cell, 165:976-89, 2016). “You wouldn’t have appreciated that heterogeneity if it weren’t for these single-molecule techniques,” says Sonenberg.

In addition to revealing the spatial and temporal dynamics of translation, the new techniques, if combined with the visualization of specific genetic loci, could even allow researchers “to see the entire central dogma playing out in a cell,” says Tanenbaum. “And that would be pretty cool.”