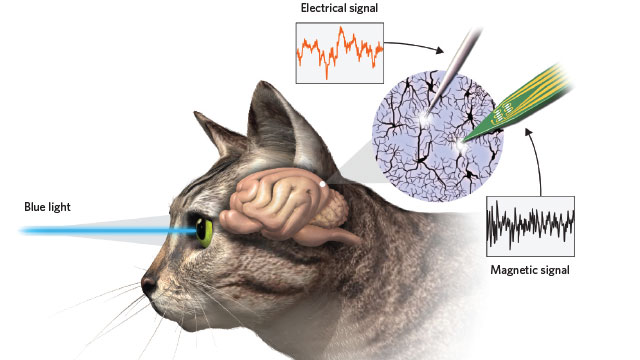 ANIMAL MAGNETISM: Light shone into one eye of an anesthetized cat stimulates electrical activity in the visual cortex. A magnetrode (green) inserted less than a millimeter into the visual cortex detects the magnetic fields created by this electrical activity. Insertion of an electrode adjacent to the magnetrode allows researchers to gather and compare electrical current and magnetic field data at the same time.© GEORGE RETSECK

The brain is often described in terms of its wiring, connections, and circuits, and such language is not merely an analogy to a building’s electrical infrastructure. Neurons control the flow of charged ions—receiving, perpetuating, and discharging currents—to perform their essential functions.

Analyzing the brain’s electrical activity to gain insights into its function can be achieved with electrodes either placed upon the scalp—as in electroencephalograms (EEGs)—or inserted into the brain. But electrical currents also produce magnetic fields, and detecting these fields can offer several...

For example, while electrical fields and voltage measurements are distorted by the insulating or conductive properties of surrounding tissues, magnetic fields are not. Furthermore, electrodes are unable to detect the direction of an electrical current flow, making the source of neuronal activity hard to pinpoint. Magnetic sensors, on the other hand, can determine both the intensity and direction of a magnetic field and, by inference, the underlying current flow. Lastly, for measuring voltages, a second reference electrode is required, which can complicate interpretations, whereas magnetic recordings need just one detector.

Like voltages, however, magnetic fields become weaker the farther away a detector is located, explains Pannetier-Lecoeur. So she and her colleagues have developed the first magnetic probe for insertion directly into the mammalian brain.

To create magnetic detectors small enough to insert into the brain, yet powerful enough to detect magnetic fields, the team used a new technological approach called spin electronics. This allowed them to engineer needle-shape probes just 150 µm wide—an impossibility with previous magnetic sensor technologies. Inserting these probes, called magnetrodes, into the visual cortex of anesthetized cats, the researchers could monitor the brain’s magnetic activity in response to light stimulation of one eye.

Although the signal-to-noise ratio of Pannetier-Lecoeur’s magnetrodes isn’t yet perfect, notes Lauri Parkkonen of Aalto University in Helsinki who was not involved in the work, “spin electronics is a field that is advancing rapidly,” so improvement in sensitivity “I think is likely.”