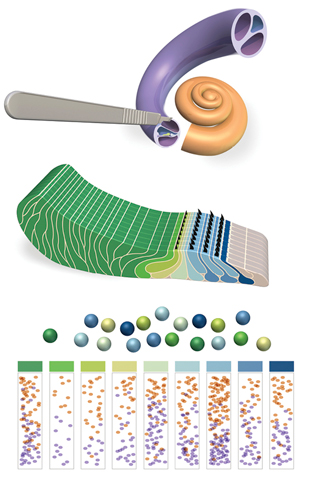 FROM ORGAN TO SINGLE CELLS: To build a map of cells within the organ of Corti—where sound is translated to neural activity—scientists divide the cochlea in two, then break it up into its constituent cells. See full infographic.© GEORGE RETSECKAge-related hearing loss caused by damage to the sensory hair cells within the cochlea is extremely common, but studying the inner ear is tough. “It’s in the densest bone in the body, so you don’t have access,” says John Brigande of Oregon Health and Science University in Portland. Even if you can extract cells, he says, “there are so darn few of them.”

Despite these technical difficulties, researchers have gleaned gene-expression information about different cell types within the organ of Corti—home to the sensory cells within the cochlea. But “it’s not only important to know what a cell expresses,” says Robert Durruthy-Durruthy,...

To this end, Durruthy-Durruthy, Heller, and postdoc Jörg Waldhaus have derived a 2-D map of organ of Corti cells from neonatal mice. First, the team sorted all cell types across the medial-to-lateral axis (or width) of the organ based on marker gene expression. The approximately 900 sorted cells, representing nine cell types, were then each quantitatively analyzed for the expression of 192 selected genes. Computational analysis of these expression data then enabled reconstruction of the cells’ positions along the organ’s apical-to-basal (length) and medial-to-lateral axes. In principle, the technique, which harnesses gene-expression information to determine cells’ spatial organization, could be applied to generate 2-D maps of any complex tissue, says Durruthy-Durruthy.

Within the mammalian cochlea, apical cells retain regenerative capacity for a few weeks after birth, but basal cells do not. “Spatial mapping allows us to get at the differences [between these cells],” says Brigande, and that could ultimately highlight possible ways to reinstate regeneration in the adult ear. (Cell Reports, 11:1385-99, 2015)