Poking and prodding a cell’s innards can reveal a great deal about its properties and functions. But the tools available for such detailed manipulations have their limitations, being either invasive or insufficiently powerful. Noninvasive approaches such as optical or acoustic tweezers work well at power levels suitable for pushing molecules around, but can cause heat damage or excessive agitation when delivering enough energy to move organelles.

Magnetic tweezers—which use microscope-mounted magnets to remotely move a magnetic object, such as a bead, introduced into a tissue or cell—avoid the problems of damage at higher power and have “always had great promise,” says Dyche Mullins of the University of California, San Francisco. However, they have had their own difficulties. For example, while a magnetic object several microns in size can be used to push and prod the exteriors of whole cells or isolated organelles, explains Mullins, intracellular... 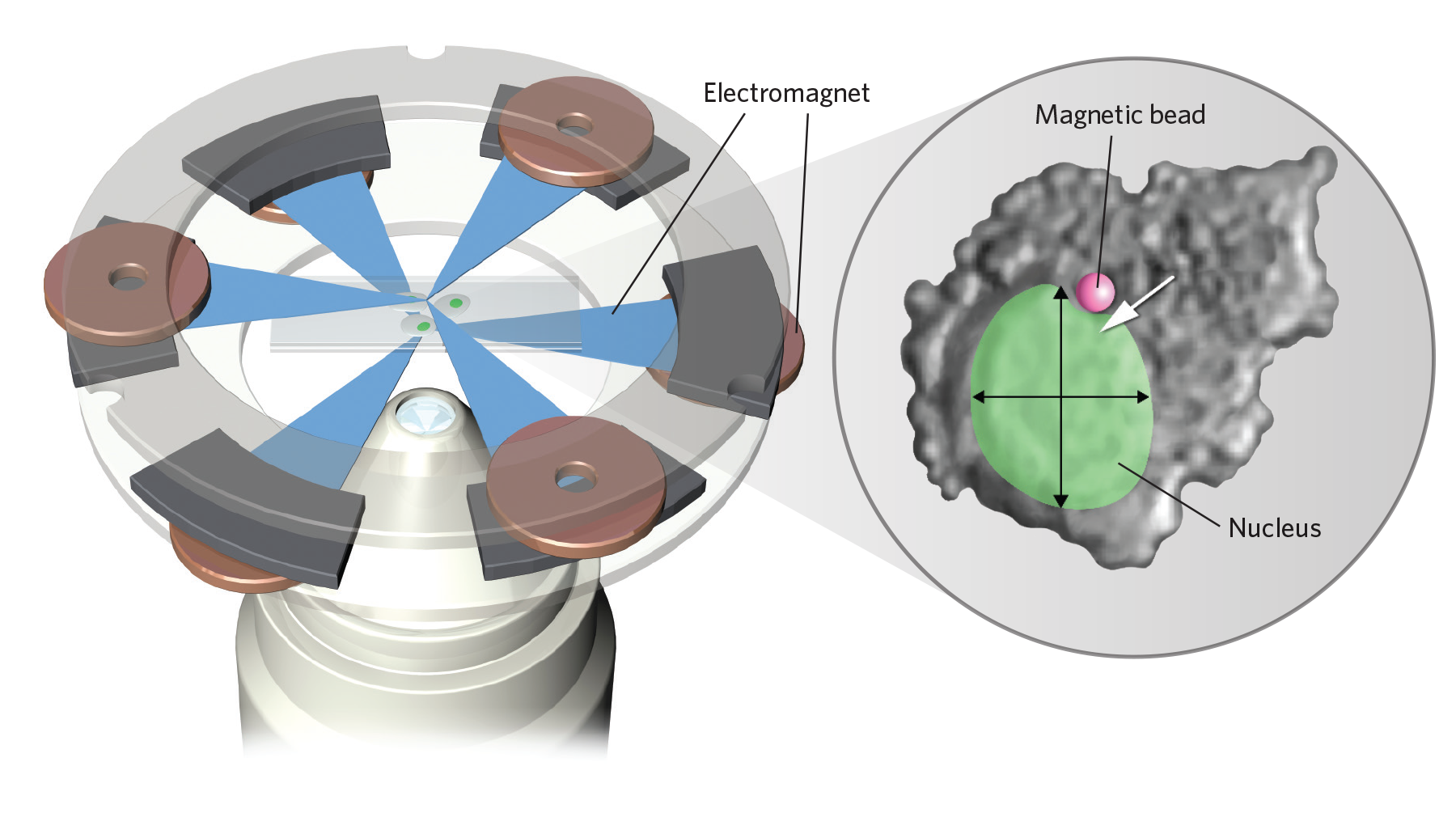 ATTRACTION AND REPULSION: To learn about cells’ workings by physically manipulating their contents, scientists devised a new form of magnetic tweezers. The system consists of magnets mounted on a microscope, which researchers use to control a tiny metallic bead with enough force to prod organelles.
See full infographic: WEB | PDF
© george retseck

To maximize the magnetic force applied to a bead small enough (700 nm) to be introduced into a cell via endocytosis, Yu Sun of the University of Toronto and his colleagues have brought the electromagnetics very close to the bead-containing cell (as little as 150 µm away) on a specially adapted microscope stage. And to achieve precision movement in three dimensions, they used six electromagnets—three above and three below the sample—under the control of a custom-built, feedback-informed algorithm.

The team used the system to analyze the mechanical properties of nuclei in human bladder cancer cells, maneuvering a bead to depress the nuclear membranes along different axes. Among their findings were that nuclei are more rigid in the long axis—which is aligned with the direction of migration—than in the short axis, and that the nuclei of late-stage cancer cells are generally softer than their early-stage counterparts.

“The high spatial 3-D precision of the movements is impressive,” says Mullins, who was not involved with the project. “It puts magnetic tweezers in a position they have not been in before.” (Sci Robot, 4:eaav6180, 2019)