Put a young male fruit fly together with a virgin female and what happens? Nothing, if Ann-Shyn Chiang has anything to do with it, because each time the male gets near the female, Chiang zaps him with a laser beam. Chiang, from the National Tsing Hua University in Taiwan, is studying learning, memory, and social behavior in Drosophila, and his laser beam system is designed not only to train flies—in this case, to avoid courting a female—but also to track their movements, and to manipulate their behaviors by switching neurons on and off.

The new system, called ALTOMS (for automated laser tracking and optogenetic modification system), uses a CCD camera to capture fly movement at 40 frames per second. Software designed by Chiang then analyzes this movement data in real time and uses it to automatically target laser beams to the fly’s head, abdomen, or thorax as the...

The system is also versatile, says Greenspan. For example, the laser beams can be used as a painful deterrent to condition fly behavior, as in the case of the aforementioned courtship scenario. Or, when set to a lower power, the lasers can activate or inhibit specific neurons that have been genetically engineered to express light-sensitive ion channels—a technique called optogenetics. In proof-of-principle experiments, Chiang made individual, freely moving flies jump or faint simply by manipulating neuronal activity. He even replicated the female-avoiding behavior by optogenetically activating pain-transmitting neurons without the actual punishment. The applications of such high-precision laser tracking, says Greenspan, are as numerous “as your imagination permits.” Indeed, another group recently devised FlyMAD, an almost identical precision-targeted laser system that uses infrared light (heat) to thermogenetically control engineered neurons in freely moving flies. 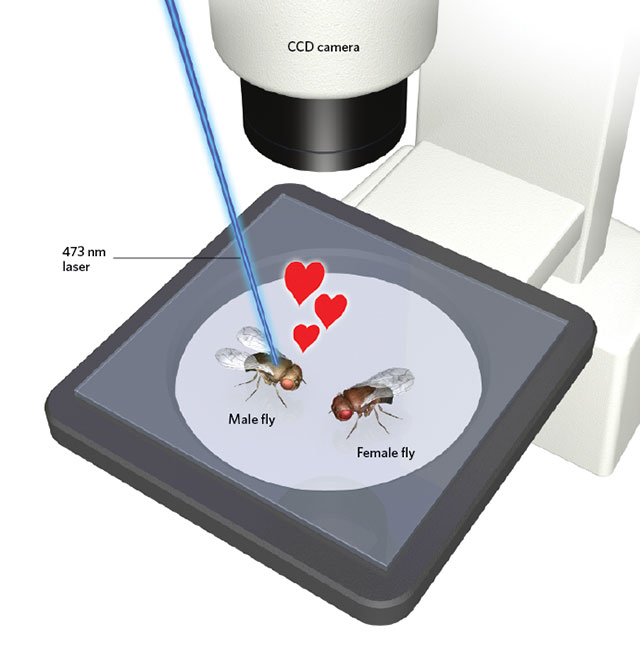 LOVE HURTS: A male fly gets zapped by a blue laser anytime he attempts to court a female. A CCD camera tracks the fly’s movements for precise targeting of the laser to his abdomen and records the fly’s responses for analysis (top).© GEORGE RETSECK 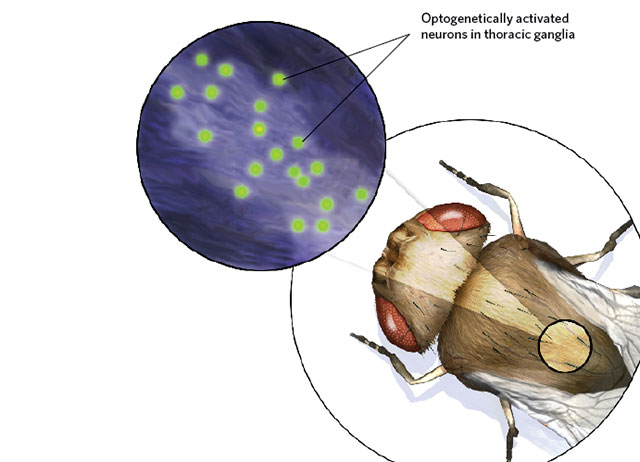 RESTRAINING ORDER: The laser is trained on pain-transmitting neurons (green) that researchers genetically modified to express a light-sensitive ion channel. Activation of the neurons by the laser causes the male fly to learn to avoid the female.© GEORGE RETSECK