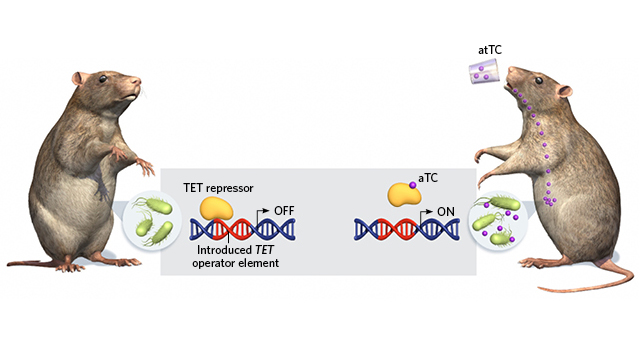 BUG CONTROL: Researchers modified an endogenous Bacteroides promoter sequence to be inducible—it can be turned on or off in mice by adding (right) or omitting (left)  anhydrotetracycline (aTC) to the animal’s drinking water. The aTC binds to the TET repressor protein (yellow), thereby preventing its suppression of gene expression. As a proof of principle, the researchers integrated the modified promoter upstream of a sialidase gene in the bacterium’s genome, and showed they could control the enzyme’s activity in mouse intestines.© GEORGE RETSECK

The past decade has seen a surge in microbiome research and, with it, a greater appreciation of the relationships between resident microbes and their hosts. But the focus is shifting, says microbiologist and immunologist Justin Sonnenburg of Stanford University. A major goal of the field, at least in terms of human research, he says, is “to leverage our gut microbes so they can perform tasks,” such as...

But engineering gut bacteria is not straightforward, primarily because researchers have relatively little experience with the species that live in and on our bodies, says gastroenterologist Suzanne Devkota of Cedars-Sinai Medical Center in Los Angeles. “There are 1,001 ways to genetically manipulate E. coli,” she says, “but that’s not particularly useful in the human context because [E. coli] is not a dominant member of our gut bacteria.”

Now, two independent research teams led by Sonnenburg and by Andrew Goodman of Yale University have created tools to manipulate Bacteroides species, which represent about half of the bacteria that make up the gut microbiome, and have shown that they work in mouse guts.

Goodman’s team modified an endogenous Bacteroides promoter sequence to be inducible—it could be turned on or off in mice by adding or omitting an effector molecule in the animals’ drinking water (see illustration). Sonnenburg’s system, on the other hand, used a viral promoter that upregulated gene expression to 70-fold higher than the type of promoter used by Goodman’s team. The viral promoter had the power to drive levels of fluorescent protein expression high enough to visualize bacteria in the mouse gut—a previously impossible feat. Unlike Goodman’s system, however, it was not inducible in vivo.