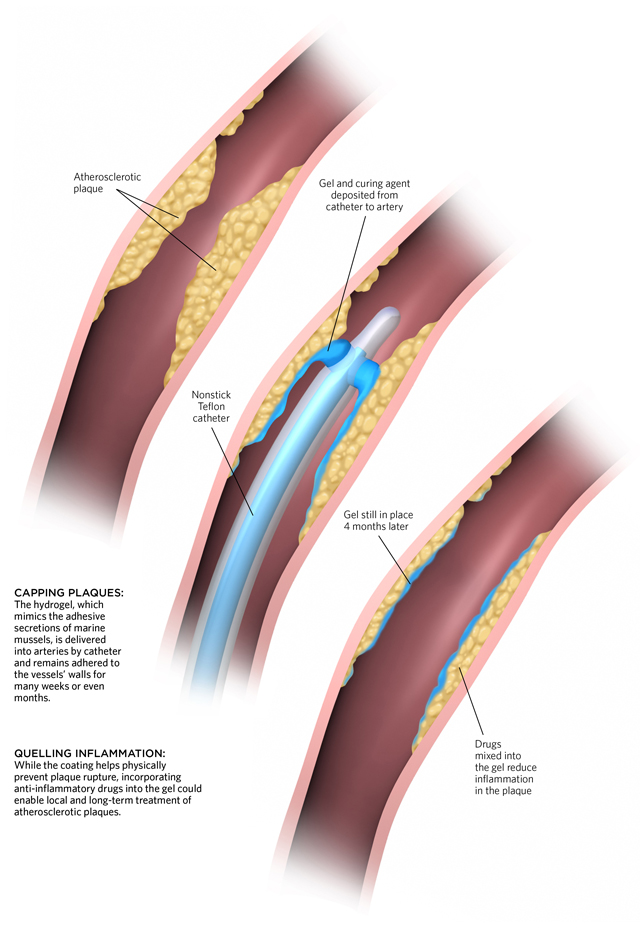 A problem with effective delivery of anti-inflammatory drugs to targets inside blood vessels is how to keep those drugs from being washed away by the rapid rate of blood flow. Gluing them in situ is the solution offered by Christian Kastrup of the Massachusetts Institute of Technology.

The glue, or hydrogel to be precise, is a synthetic material that mimics the qualities of marine mussels’ adhesive secretions. “We thought, well, if marine mussels can stick so well [to rocks] even with waves crashing over them, maybe that chemistry could be used inside blood vessels,” says Kastrup.

The gel was mixed with a curing agent, delivered to the walls of mouse arteries through nonstick Teflon catheters, and then allowed to cure before catheters were removed, in order to prevent the vessels from sticking shut. The gel did not cause any blockages or blood clots, and didn’t get washed away—it...

The team showed that by incorporating an anti-inflammatory drug, the gel could be used to reduce local inflammation in atherosclerotic plaques in mice. And Robert Levy, a cardiovascular researcher at the University of Pennsylvania, suggests that the gel might also be good for delivering drugs during balloon angioplasties—a procedure that inflates a balloon inside a narrowed artery to compress plaque deposits and improve flow. “The companies that make the current drug-coated balloons know that 95 percent of the drug is washed away . . . so the technology really needs major improvements,” he says. “A coating like the one described [by Kastrup] would be one of strong interest.” (PNAS, 109:21444-49, 2012)