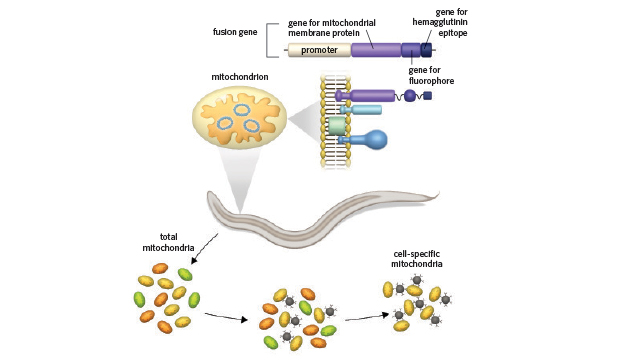 SORTED: With CS-MAP, researchers genetically label mitochondria in cells of interest, then use antibodies to isolate them for analysis.
See full infographic: WEBGEORGE RETSECKMitochondria power eukaryotic cells, but they do more than produce energy. These organelles, which contain their own genomes, RNAs, and protein-synthesizing machines, also regulate other cellular processes, including programmed cell death and calcium signaling. So it’s not surprising that mutations to mitochondrial DNA (mtDNA) can cause a range of debilitating and deadly diseases.

Studying these ailments is complicated, says University of Massachusetts molecular biologist Cole Haynes. “You might get a mutation in a respiratory chain gene, which should be important, but it only affects a handful of cells. And then another mutation that doesn’t look so different may cause severe neurodegeneration or muscle defects.”

This unpredictability is thought to stem from the differing ratios of mutant and wildtype mitochondria that can occur in...

Techniques for analyzing such cell-specific differences are limited, however, says Zuryn. It is possible to mash up the cells of a particular organ and isolate mitochondria by centrifugation, but organs consist of multiple cell types, which muddies results. It’s also possible to sort cells based on specific markers and then isolate mitochondria, but this is time-consuming, requires large amounts of material, and in some organisms, such as Caenorhabditis elegans, is technically challenging.

To achieve more accurate, sensitive, and rapid cell-specific mitochondrial isolation, Zuryn and colleagues first created a fusion of three genes: one that codes for the mitochondrial membrane protein TOMM20, one for a fluorophore (for visualization), and one that expresses the human influenza hemagglutinin (HA) epitope. The researchers then stably integrated the fusion gene into the C. elegans genome, using tissue-specific promoters to control expression. This resulted in worms with cell-specific, HA-tagged mitochondria that could be purified from the animals by homogenizing the cells, mixing the homogenate with anti-HA antibody-coated magnetic beads, and then isolating the bead-bound mitochondria with a magnet.

The technique, called cell-specific mitochondrial affinity purification (CS-MAP), allowed for the collection of mitochondria that were intact and functional—and it revealed unexpected differences in the mutation loads of different cells, such as high numbers of mtDNA mutations in germline cells, says Zuryn. All in all, says Haynes, who was not involved in the research, “if you are interested in [questions relating to] individual cell types, this is certainly the best way to go.” (Nat Cell Biol, 20:352-60, 2018)