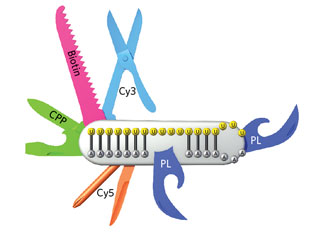 TIVA TAG: cell-penetrating peptide (CPP), FRET fluorophores (Cy3 and Cy5), photocleavable linker (PL), uracil (U), adenine (A)© GEORGE RETSECKNeighboring cells with the same morphology in the same tissue—neurons in the brain, for example—may be unique in their mRNA and protein-expression profiles. While cell individuality is increasingly appreciated, current whole-transcriptome techniques cannot analyze a single cell within a tissue without perturbing the cell’s neighbors or having to use fixed tissue samples.

Cleverly combining several molecular tools into a single, multitasking molecule, neurobiologist James Eberwine and chemist Ivan Dmochowski, both at the University of Pennsylvania, created the transcriptome in vivo analysis (TIVA) tag. It’s composed of a light-activated hairpin oligonucleotide that can enter a cell and capture its mRNA profile without contamination from neighboring cells. “The TIVA tag in its closed hairpin structure looks like a pocket knife with tools folded inside. Upon photoactivation, TIVA opens up and the...

Before opening the tag’s hairpin loop, fluorescence resonance energy transfer (FRET) between dyes attached to the RNA hairpin confirms the presence of the tag inside the cell. Because many cells in a tissue might take up tags, the trick to analyzing a single cell is to activate just the cell of interest by shining a blue laser light on it alone. This photoactivation causes the hairpin to break apart, exposing a chain of 18 uracil (U) nucleotides that can bind the poly(A) tail of mRNA molecules. The poly(U) chain of the tag retains a biotin molecule that allows researchers to retrieve and analyze the mRNAs after breaking open the cell. 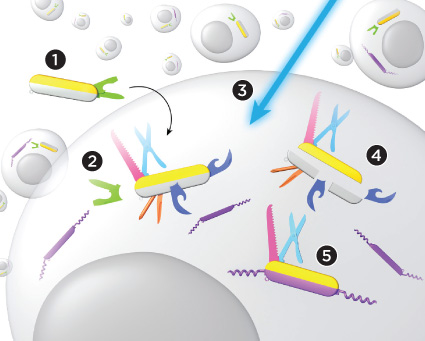 ALL IN ONE: The CPP of the TIVA tag helps the complex molecule gain entry into cells (1) and breaks off once inside the cytosol (2). The tag’s Cy3 and Cy5 dyes allow for confirmation of its presence by fluorescence resonance energy transfer (FRET). A blue laser light shone on only the cell of interest activates the tags in that cell (3). Photoactivation involves the disassembly of the hairpin tag at the PLs, exposing the polyU sequence (4). The polyA tail of messenger RNAs (purple) bind to the polyU sequence (5), and the complex is pulled out of a lysed cell by the attached biotin.© GEORGE RETSECK “This is a very elegant, although technically challenging, approach to gain insight on the transcriptome of a single cell in its native environment,” said Zhengjian Zhang, molecular biologist at the Howard Hughes Medical Institute Janelia Farm Research Campus who was not involved in the research. (Nat Meth, 11:190-96, 2014)