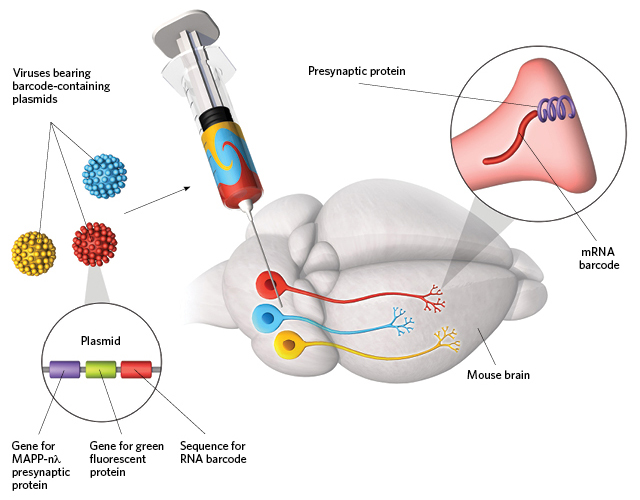 FOLLOW THE mRNA: To determine where in the mouse brain individual neurons have axon terminals, researchers inject a library of viral vectors in the vicinity of cell bodies. The viruses contain plasmids each encoding a unique RNA barcode and a presynaptic protein called MAPP-nλ that will shuttle the barcoded mRNA to the ends of the axon. Typically, each cell takes up only one virus, giving that cell an RNA identifier. Dissecting brain regions and sequencing the RNAs reveals which cells project where.© GEORGE RETSECK

Several ambitious brain connectome projects are underway to diagram the wiring of animals’ most complicated organ. For the most part, neural cartographers rely on microscopy, but tracing numerous projections across the large volumes of the brain is “extremely painstaking and slow,” says Thomas Mrsic-Flogel of the University of Basel.

To map neurons by sequencing, Zador’s team injects a mixture of approximately 106  viruses—each bearing a genetic sequence encoding a unique mRNA barcode—into mouse brain regions. By and large, each neuron becomes infected with one virus, and therefore receives just one barcode identifier. Two days later, once the mRNAs have travelled the lengths of the axons (guided by engineered presynaptic proteins), injection sites and target brain regions are dissected, and the RNA is extracted and sequenced. RNAs at the target sites matching those from the injection site thus represent individual neuron projections.

Zador and colleagues used the technique, called MAP-seq, to examine neuron projections into the cortex from the locus coeruleus—a site in the brainstem that is the sole source of the neurotransmitter noradrenaline for the neocortex. The team found that while some neurons branched out to multiple regions of the cortex, others connected with just one or two sites.

The experiment served as “a proof of principle,” says Zador, who now plans to perform hundreds of injections in a single mouse cortex to examine connectivity from multiple regions at once. This has the potential to “yield a hugely rich anatomical data set,” Mrsic-Flogel says. (Neuron, 91:975–87, 2016)