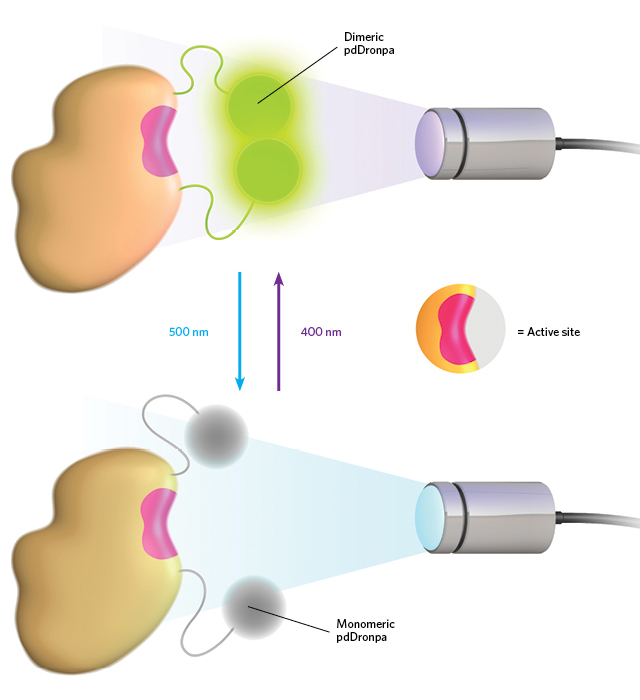 FLIPPING OUT: Researchers have designed kinases that can be inactivated and activated by light. In violet light, engineered green fluorescent domains (called pdDronpa) dimerize, glow, and block the enzyme’s active site (top). In blue light, the domains break into monomers, lose their fluorescence, and uncage the kinase’s active site (bottom).© GEORGE RETSECK

Controlling a protein’s activity with light enables spatial and temporal regulation that would be practically impossible otherwise. Such fine control is desirable for teasing out the molecular details of cellular processes and for initiating the actions of therapeutic proteins in precise locations in the body.

Molecular biologists, including Michael Lin of Stanford University, are hard at work developing and improving such protein technology. And Lin’s latest approach is “particularly remarkable,” says Harald Janovjak of the Institute of Science and Technology in Austria.

The principal component of Lin’s system is an engineered protein dimer (a green fluorescence...

By encoding these monomers as domains on either side of the active-site sequences of kinases, Lin’s team has created enzymes that are inactive when the domains are dimerized and active when the domains separate into monomers. Janovjak likens these engineered kinases to people folding and unfolding their arms. “If I were to cross my arms in front of me, that makes interactions with other people more difficult,” he says.

What’s more, the fluorescent protein itself changes brightness from high to low as it switches from dimer to monomer, providing a visual indication of kinase activation, Lin explains.

Using this dimerization technique, Lin’s team has made four photo-switchable kinases, which the researchers have shown work as well as the endogenous enzymes in both cells and animals. But, the concept could be readily applied to other types of proteins, says Lin. (Science, 355:836-42, 2017)