SMALL-BATCH PROTEOMICS: To analyze the protein composition of neurons in the temporal cortex of the human brain, researchers shave a thin slice from a formalin-fixed, paraffin-embedded tissue sample and affix it to a slide. Then they use a red laser to carve away a section of the slice. Digestion reagents prep the neuronal material for proteomic analysis via mass spectrometry.© GEORGE RETSECK

By far the majority of human tissues available for research exist as formalin-fixed, paraffin-embedded (FFPE) specimens. Preserving tissues in this way maintains their structure and allows for thin slices to be prepared for histological analyses, among other things. It had been assumed, however, that this “ridiculously harsh” preservation technique was incompatible with protein studies, explains neuroscientist Stephen Ginsberg of New York University (NYU). “The thought was that the fixation irrevocably damaged the proteins.”

Indeed, the gold-standard tissue preparation for proteome analyses was thought to be snap-freezing, Ginsberg says. He adds that comparing frozen samples to formalin-fixed ones was like comparing “grapes to raisins.” But frozen samples are exceptionally scarce, so while it may not have been considered ideal in the past, obtaining protein data from FFPE samples is certainly pragmatic. Researchers have therefore been tinkering with FFPE proteome protocols, and have been unexpectedly successful, extracting quantities of protein comparable to those from frozen tissue.

However, the majority of these studies have utilized large amounts of tissue. Thomas Wisniewski, also at NYU, wondered whether he could push the protocols further still: to individual cell populations. Now, he and his colleagues have done just that. They’ve optimized the extraction procedure to maximize protein yield and combined this with laser capture microdissection (LCM)—a first for FFPE tissue.

In their latest study, the researchers microdissected millimeter-scale patches of specific neuron populations from 8 µm-thick slices of FFPE brain tissue obtained from Alzheimer’s disease patients. They then extracted the proteins for analysis by mass spectrometry.

The researchers detected approximately 400 proteins from samples containing around 12,000 neurons. And most of those proteins were neuronal or Alzheimer’s disease–related, confirming the validity of the technique. “It’s not going to give you the entire proteome,” says Ginsberg, who was not part of the study, “but what it does is give you access to tissues that you didn’t have before. . . . It’s very utilitarian.” (Scientific Reports, 5:15456, 2015) 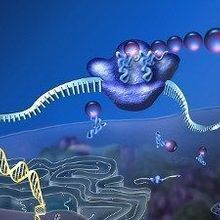