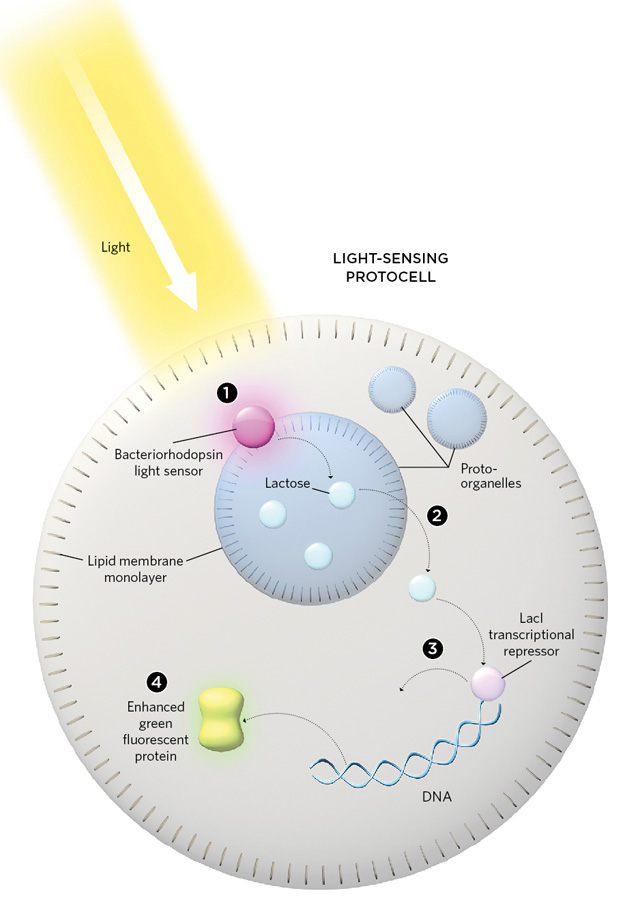 A PROTO-ORGANELLE IN OPERATION: Stimulation of a light sensor on the membrane of a proto-organelle (1) leads to the transport of lactose from the organelle to the main compartment of the protocell. (2) The increase in lactose concentration prompts the release of a transcriptional repressor, LacI, (3) and the subsequent expression of enhanced green fluorescent protein. (4)© GEORGE RETSECK

The development of synthetic cells is in its infancy, and researchers are tackling the challenge from two angles. They can either modify an existing single-cell organism—for example, a bacterium—or start from scratch and build a membrane-encapsulated protocell. One major improvement to the latter approach, accomplished by David Miller, a researcher at the Walter and Eliza Hall Institute for Medical Research in Parkville, Australia, and his colleagues, is to add synthetic organelles.

“The advantage of using this bottom-up system is that you basically don’t have a lot of the evolutionary...

Existing protocell designs have consisted of a simple lipid membrane separating the inside of the cell and the reactions therein from the outside environment. But, “our idea was to add an additional lipid-bound compartment that would segregate some of the components,” explains Miller. He calls the compartment a proto-organelle.

Miller’s newly designed protocells have a single type of proto-organelle, a proof-of-concept structure containing lactose and a light-activatable transporter mechanism. In response to light stimulation the proto-organelles release lactose into the main protocell compartment, the equivalent of a cell’s cytoplasm, which contains a lactose-activated gene that encodes a fluorescent protein. The gene’s expression is tightly linked to the activity of the organelle, a level of control not previously possible in protocells.