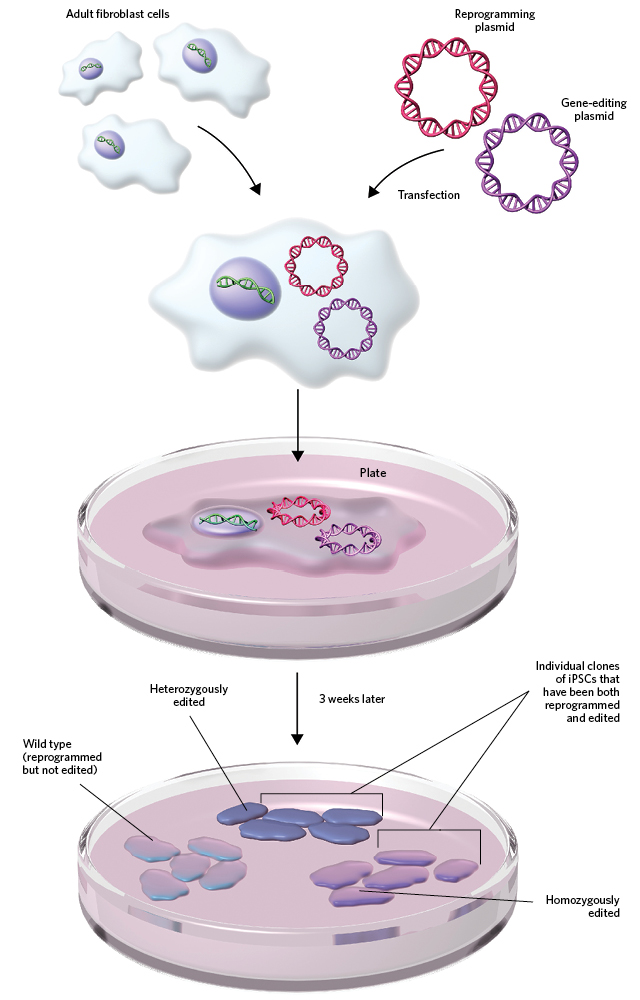 In theory, mutating a gene of interest inside stem cells enables researchers to analyze the effects of that mutation on the development of particular cell types. In the laboratory of Jack Parent at the University of Michigan Medical School, for example, postdoctoral researcher Andrew Tidball is using such an approach to investigate how gene mutations associated with epileptic encephalopathy affect brain cell development. But while trying to introduce the specific mutations into human induced pluripotent stem cells (iPSCs), he ran into difficulties.

A major problem, Tidball says, is that after transfecting iPSCs with gene-editing plasmids, individual...

Tidball realized that instead of first transfecting cells with plasmids containing reprogramming genes and then later adding plasmids with CRISPR-Cas9 components, he could combine the two steps into one. Because iPSC induction already involves the production of single cell–derived colonies, he could, in one fell swoop, create gene-edited stem cell lines.

Tidball, Parent, and colleagues have now used the technique to generate multiple cell lines containing epilepsy-associated mutations, and have found that not only is the combination strategy more time-efficient and reproducible than the sequential approach, it is also more successful: more clones carry the intended mutations. The team’s investigations suggest that this improvement may be due to increased chromatin accessibility at the time of reprogramming, allowing the gene-editing machinery to reach its target DNA more easily.

The technique also preserves genome integrity, says the University of Wisconsin’s Anita Bhattacharyya, who was not involved in the work. “We know that these pluripotent stem cells, over time, tend to acquire chromosomal abnormalities,” she says, so doing both processes at once reduces the likelihood of aberrations. “For those people who work in disease modeling of single-gene mutations, this is a really important move forward.” (Stem Cell Rep, 9:725-31, 2017)