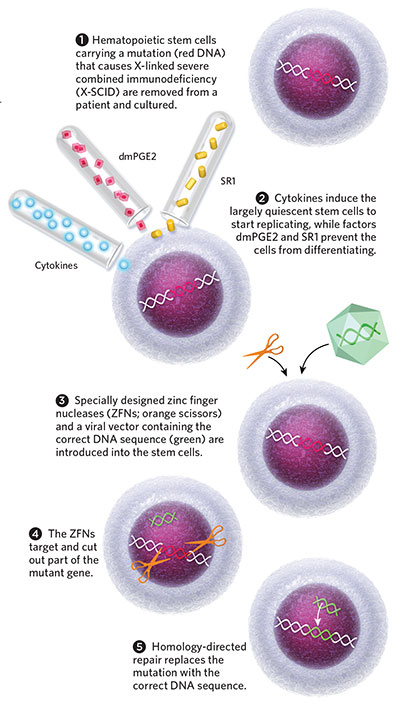 © GEORGE RETSECKTargeted gene editing is an experimental therapeutic approach that avoids the risk of insertional mutagenesis associated with the more traditional gene-therapy method of adding a functional gene copy to cells. In gene editing, special nuclease enzymes, such as zinc finger nucleases (ZFNs), are directed to cut the mutant gene of interest, and a replacement piece of DNA—containing the desired sequence—is then integrated by means of the cell’s own homology-directed repair pathway.

While the approach has been used to correct mutations in a variety of cell lines, attempts to edit genes in human primary hematopoietic stem cells (HSCs)—important targets for treating a number of inherited blood disorders—have proved unsuccessful.

“The real hurdle was to achieve gene editing in cells relevant for [clinical] translation,” says Luigi Naldini of the San Raffaele Scientific Institute in Milan. The challenge is that homology-directed repair requires cells to be cycling, and, for...

The group successfully repaired between 3 percent and 11 percent of the patient’s HSCs. While that may not sound like many cells, “it’s pretty exciting,” says Harry Malech of the National Institute of Allergy and Infectious Diseases who was not involved in the study, because “it’s encouraging that you can do it at all.”

Improving the efficiency may be necessary to fix certain blood-based disorders, says Malech, but he adds that “for diseases like X-linked SCID . . . the goal can be quite low” because the corrected stem cells will likely be able to expand once inside the patient. (Nature, 510:235-40, 2014)