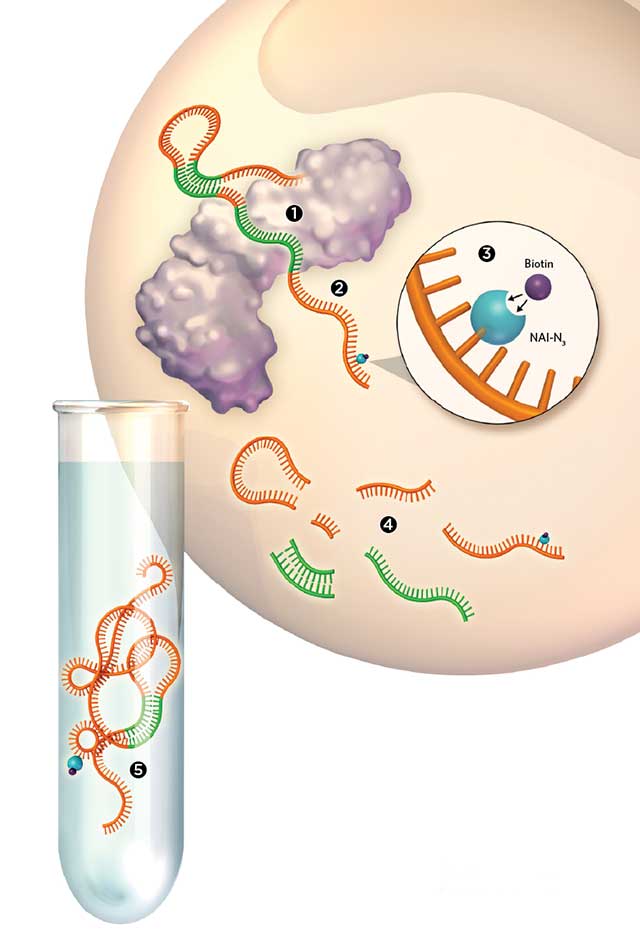 SHAPE CATCHER: To determine the secondary structures of RNAs in their natural cellular context (1), an unpaired nucleotide (orange) is first modified with NAI-N3 (2). Next, biotin clicks onto the NAI-N3 (3) allowing retrieval of the modified RNA via biotin binding to a streptavidin bead. The RNA is then chopped into small fragments (4) for sequencing to reveal which nucleotide is modified and thus unpaired (orange) versus unmodified and thus paired or bound to a protein (green). If these in vivo modifications, analyzed across the transcriptome and among many copies of each RNA, are compared with those seen on the same RNAs in vitro (5), potential protein binding sites (1) and other structural differences can be revealed because the probe will bind to different bases.© GEORGE RETSECK

Like pieces of sticky tape, single-stranded RNA molecules can fold over and bind to themselves, via base pairing. Determining...

To study the secondary structures of multiple RNAs simultaneously, researchers have come up with chemical modification techniques that detect unpaired nucleotides in a pool of RNA molecules. Subsequent sequencing of the RNAs reveals the patterns of modified and unmodified bases (their unpaired or paired statuses) and thus indicates how each RNA molecule folds. One of these transcriptome-wide techniques, however, only targets two of the four nucleotides. And another targets all four nucleotides, but only works in vitro—where natural chemicals and proteins affecting structure are absent.

Chang and colleagues have now built upon the all-nucleotide modification technique—called selective 2'-hydroxyl acylation and profiling experiment (SHAPE)—to make it compatible with in vivo RNA analysis, and to allow for the enrichment of modified RNAs, thereby improving the signal-to-noise ratio. All in all, it means “we can now measure structural properties of RNAs at high resolution and very high throughput in their natural cellular context,” says Julius Lucks of Cornell University.

Additionally, by comparing how the modifications differ between RNAs inside cells and the same RNAs in vitro, Chang has been able to identify nucleotide sequences that are likely protein-binding sites. (Nature, 519:486-90, 2015)