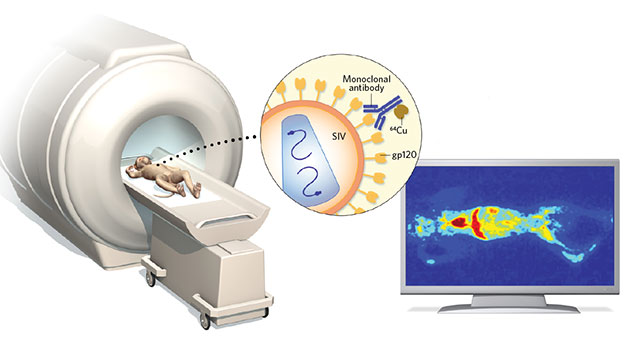 HIDING OUT: An SIV-infected macaque undergoes a PET scan after being injected with an antibody against a viral envelope glycoprotein (gp120). The scan picks up the radiolabeled antibody, highlighting where replicating HIV exists in the body beyond the blood.© GEORGE RETSECK

Antiretroviral drug treatment of HIV-positive patients reduces the virus to an undetectable level, but in reality it’s not eradicated. The virus still lurks in secluded locations around the body. “If you stop giving the drugs, the virus comes back,” says Tom Hope of Northwestern University’s Feinberg School of Medicine in Chicago.

The problem, Hope says, is that “almost everything we know about this disease comes from studying the blood, and that does not reflect what’s going on in the different tissues.” The only option for studying body tissues has been to perform biopsies, which are invasive and often don’t provide a complete picture of the whole tissue,...

François Villinger of Emory University in Atlanta realized there “needed to be a way to quantify virus throughout the entire body.” To that end, his team has developed a radiolabeled antibody against a viral envelope glycoprotein in the nonhuman primate version of HIV—SIV—and used it to track replicating virus in infected macaques.

Positron emission tomography (PET) scans detected antibody signals in locations expected to be SIV hot spots—the gut and reproductive tract—and some locations that were less expected: the lungs and nasal cavity. Crucially, while antiretroviral treatment reduced the PET signal from these sites, it was not always eradicated. Similar sites of persistent, minimal viral replication were also apparent in untreated animals that had naturally suppressed infection—so-called elite controllers.

Determining precisely where these pockets of surviving viruses are located “will be invaluable information” for designing new drugs, says Hope. Moreover, the PET technique will enable the efficacy of such drugs to be readily assessed in macaques and, ultimately, in patients. (Nature Methods, doi:10.1038/nmeth.3320, 2015)