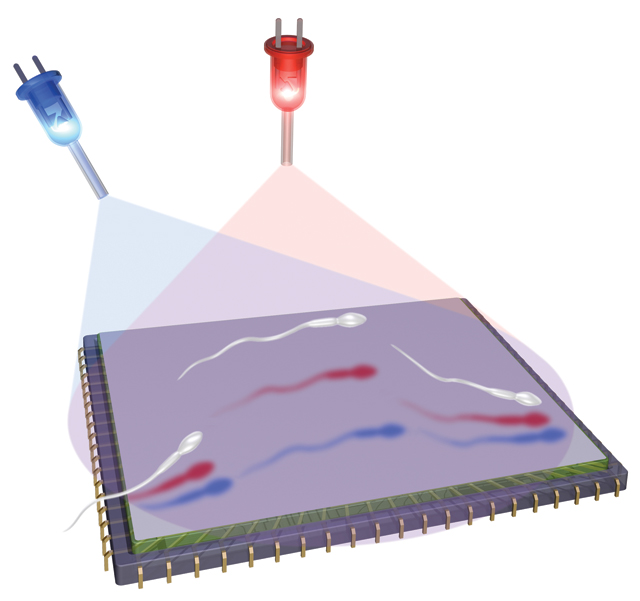 SWIMMING LESSONS: Two differently angled light sources (red and blue) create shadows cast by a sperm moving across a photosensitive chip. Determining the distance between the center points of the shadows and their position relative to the light sources enables the sperm’s 3-D location to be calculated.GEORGE RETSECK

DIFFERENT STROKES: Using the tracking technique, researchers discovered that more than 90% of human sperm swim forward with small side-to-side movements, while approximately 5% swim in a faster-paced helical pattern. The remaining sperm swim in a hyper-activated or hyper-helical manner, where the sperm are more active but less directional.COURTESY OF AYDOGAN OZCAN WITH PERMISSION FROM PNAS 109:16018-22, 2012

Human sperm are very tiny and swim very fast, which has made tracking their movements difficult. But now there is a solution—an unusual imaging system that not only doesn’t use a lens, it doesn’t even image sperm. Instead, it tracks their...

Microscopes that use lenses have limited fields of view and depths of field, explains Aydogan Ozcan of the University of California, Los Angeles, who devised the new system. “That puts a limit on observing [sperm’s] natural three-dimensional trajectories,” he says.

His new system uses a photo sensor chip instead of a lens to increase the field of view, and tracks sperm’s shadows instead of the sperm themselves to increase depth of field. “Even if a sperm is moving up and down, you can still see the shadows,” Ozcan explains. Indeed, with two light sources, each sperm casts two shadows, and the position, shape, and separation of those shadows changes depending on the sperm’s position—information that can be used to precisely calculate its 3-D path.

The approach largely confirmed previous predictions about human sperm motility. But more importantly, it offers a powerful, high-throughput system that can be used for studying not only sperm dynamics—informative for infertility research and diagnostics—but also movements of a variety of small, motile cell types, such as bacteria and algae, says Jackson Kirkman-Brown of the University of Birmingham, U.K. “They have made real inroads into tracking how cells move in 3-D,” he says. (PNAS, 109:16018-22, 2012)