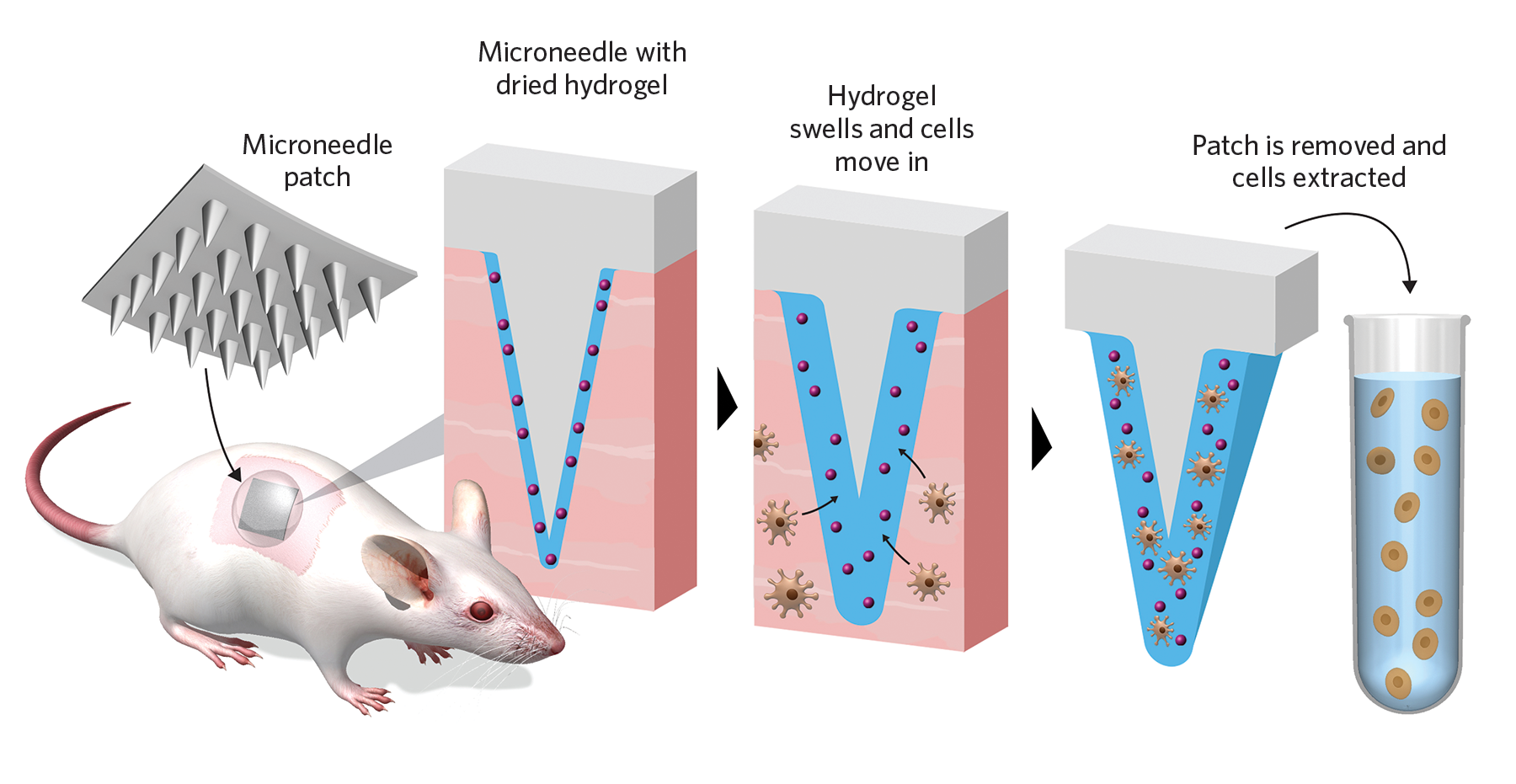 PATCHWORK IMMUNE MONITORING: To monitor an animal’s immune response to a given stimulus, researchers can apply a stick-on patch, containing polymer microneedles coated with a dried hydrogel, to the skin, puncturing the epidermis. The hydrogel swells upon contact with fluids in the tissue, and skin-resident immune cells can migrate into it. Immunogenic molecules and antigens incorporated into the gel help to attract and retain immune cells either specifically (via antigen recognition) or nonspecifically (via innate pathways). After 24 hours, removal of the patch and processing of the hydrogel enables recovery of the cells for further analysis.
See full infographic: WEB | PDF
© george retseck

The progression of an immune response can be thoroughly studied in the blood thanks to the ease of drawing the fluid from animals and humans. But “it’s becoming increasingly clear that tissue-level responses don’t look like blood-level responses,” says immunologist Sarah Fortune of the...

A researcher could examine an immune response in, for example, the skin by taking a punch biopsy, which is invasive, or by measuring redness and swelling, which reveals nothing about the cells and factors involved in the response.

But new microneedle patches devised by MIT’s Darrell Irvine and colleagues provide information about the cellular response without having to remove tissue for analysis.

The patches measure approximately 1 cm2, contain an array of roughly 80 solid polymer microneedles (each one around 250 µm2 at its base and 500–600 µm long), and are coated in a biocompatible dried hydrogel. When applied to the skin, the needles puncture the epidermis, the hydrogel swells as it contacts fluids in the tissue, and immune cells can migrate inside. While the gel can be used as is, the team found that including nonspecific immune-boosting agents (adjuvants) increased cell recruitment twofold. Specific antigens can also be included to assess different immune dynamics, such as the development of antigen-targeted cells following a vaccination.

The team used such adjuvant- and antigen-loaded microneedle patches to analyze skin-resident memory T cells in mice after vaccination with an immunogenic protein. They found that while both the skin and blood had an abundance of these cells in the early weeks following vaccination, after a few months their numbers had dwindled in the blood but remained high in the skin—possibly because the skin is a first line of defense, says Irvine.

Fortune, who was not involved in the study, says the patches are “an extremely useful immune monitoring technology that opens up new opportunities for understanding tissue-level responses to infection and vaccination.” (Sci Transl Med, 10:eaar2227, 2018)