Researchers may be able to ditch the expensive photolithography equipment used for making microfluidic flow cells and cell-patterning devices designed to study cellular spatial organization. Scotch tape and a scalpel are all that’s needed, says Raquel Perez-Castillejos, a biomedical engineer at the New Jersey Institute of Technology in Newark.

Typically, researchers use photolithographic technology to fabricate the tiny chambers and channels used in microfluidic devices, or wells for depositing cells onto specific parts of culture dishes and slides. However, the equipment can be expensive, and generally needs to be housed in dust-free facilities, which are not readily available to all researchers.

Perez-Castillejos realized that such a sophisticated and precise apparatus was not essential for tackling many research questions. “Sometimes we are trying to provide very high precision to problems that don’t require it, and we make it complicated for no reason,” she said.

Instead, her group made molds by sticking Scotch tape to glass slides and cutting long, thin rectangles, or other shapes, using just a scalpel and ruler. She then peeled off the surrounding tape, leaving the shapes stuck to the slide, and covered them with a liquid silicon-based polymer called PDMS. Once the PDMS casts solidified, these were also peeled off and used for plating cells to perform wound-healing assays. Simple microfluidics chambers should be just as simple to make.

“For those labs not set up for microfluidics or photolithography, [the technique] could provide an easy entry into the field,” says Michael Dickey, a chemical and biomolecular engineering professor at North Carolina State University, who was not involved in the study. (Biotechniques, 53:315-18, 2012.) 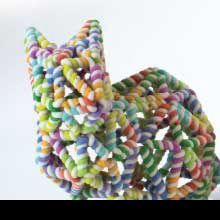