Artificial chromosomes are essentially miniature versions of real chromosomes that can replicate alongside their natural counterparts in host cells. They have the potential to be “incredibly useful for genome engineering, especially in cases where you want to put in a very large piece of DNA that, let’s say, [encodes] a whole cascade of enzymes involved in a particular pathway,” says chromatin researcher Gary Karpen of Lawrence Berkeley National Laboratory. However, this potential isn’t always realized because there’s a stubborn hurdle hindering artificial chromosome construction: creating centromeres.

Like natural chromosomes, artificial ones need centromeres to attach to mitotic spindles and separate sister chromatids during cell divisions. Centromeres are defined by the presence of a specialized histone called CENP-A that’s critical for connecting to spindles. But how CENP-A is initially recruited is not entirely clear. Centromeres tend to be buried deep in a jungle of repetitive DNA, known as α-satellite DNA in humans, and those repeats often contain binding sites for CENP-B, a protein thought to contribute to CENP-A loading. Researchers therefore generally include α-satellite DNA with CENP-B binding sites in sequences they wish to convert to human artificial chromosomes (HACs), but even with these seemingly appropriate sequences, centromere formation is hit-and-miss.

BUILDING A CENTROMERE: To convert a piece of cloned DNA into a centromere-containing human artificial chromosome (HAC), an array of repeated LacO sequences is incorporated into the DNA. The DNA is then transfected into human cells that have been engineered to express a fusion protein consisting of a LacO binding domain and a factor called HJURP. The fusion protein binds to the LacO domains (1), and incorporates the specialized centromeric histone CENP-A into and along neighboring chromatin (2). In turn, the region of CENP-A-containing chromatin forms a centromere, converting the cloned DNA into a functional self-perpetuating HAC (3). WEB | PDF
GEORGE RETSECK

Chromosome biologist Ben Black of the University of Pennsylvania and colleagues have now taken a more direct approach, essentially forcibly recruiting CENP-A into their chosen piece of cloned DNA. They first incorporate repeats of a 27-base-pair sequence called LacO in the part of the overall DNA molecule where they want a centromere to form. They then transfect the LacO-containing DNA into human cells engineered to express a fusion protein composed of a LacO binding domain and a protein called HJURP—an epigenetic factor responsible for incorporating CENP-A into chromatin. After binding to the LacO repeats, the fusion protein integrates CENP-A into and along the surrounding DNA, forming a centromere to support the stable replication of the HAC.

Using this method, the team was able to create functional centromeres in previously recalcitrant α-satellite–containing regions of cloned DNA. The researchers were even able to generate HACs using a region of chromosome 4 that entirely lacked α-satellite repeats. If other DNA sequences are similarly amenable to α-satellite–free HAC production, this could eliminate the added difficulties of handling highly repetitive DNA. 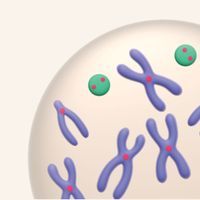