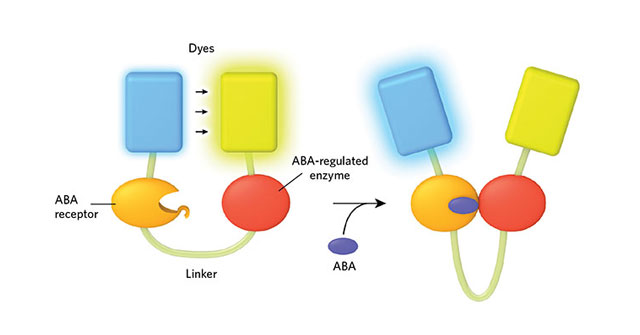 FRETing: When abscisic acid (ABA) is absent, resonance energy transfer between fluorescent dyes (blue and green) of the reporter molecule results in a green signal. Upon ABA binding, the conformation of a covalently linked, ABA-regulated phosphatase changes, the energy transfer stops, and the reporter glows blue.GEORGE RETSECK 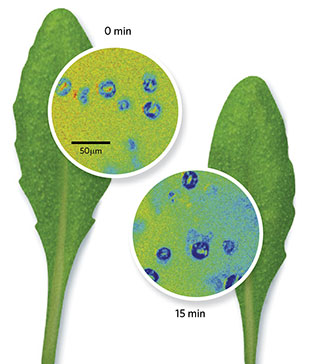 RESPONDING TO STRESS: Schroeder’s group exposed Arabidopsis plants to low-humidity conditions and found that ABA levels rose in guard cells over the course of 15 minutes, as indicated by the reporter’s increase in blue fluorescence (inset).LEAF INSET: ELIFE, DOI:10:01739, 2014 Climate change threatens to bring higher temperatures and more extreme weather conditions, including severe droughts. Researchers therefore want to understand how plants tolerate such stress, with the hope of achieving drought-defying crops. A plant’s natural response to water scarcity is to produce the stress hormone abscisic acid (ABA), which activates an array of water-conserving mechanisms, such as closing the...

Now, the development of two fluorescence resonance energy transfer (FRET)–based sensors means “you can actually look at the dynamics of the hormone in live plants,” says Jeff Leung of France’s National Center for Scientific Research who was not part of the work.

The new systems, ABACUS and ABAleon, devised independently by Wolf Frommer of the Carnegie Institution for Science in Stanford, California, and Julian Schroeder of the University of California, San Diego, work similarly. Both use a fluorescently tagged ABA-binding protein whose conformation changes when it hooks up with ABA. As a consequence, explains Leung, “they fluoresce at different wavelengths depending on whether ABA is there or  not.”

Schroeder’s team plans to use the sensors to examine the speed of ABA’s response to low humidity. The group already discovered that ABA levels increased in individual guard cells, which surround and control stomata apertures, just 15 minutes after humidity drops. “[But] you really want to know what happens at minute one, two, three,” Schroeder says. “These are some really fundamental questions that remain [unanswered], and so these kinds of reporters could help address them.”
(eLife, doi:10.7554/eLife.01739, 2014 and eLife, doi:10.7554/eLife.01741, 2014)