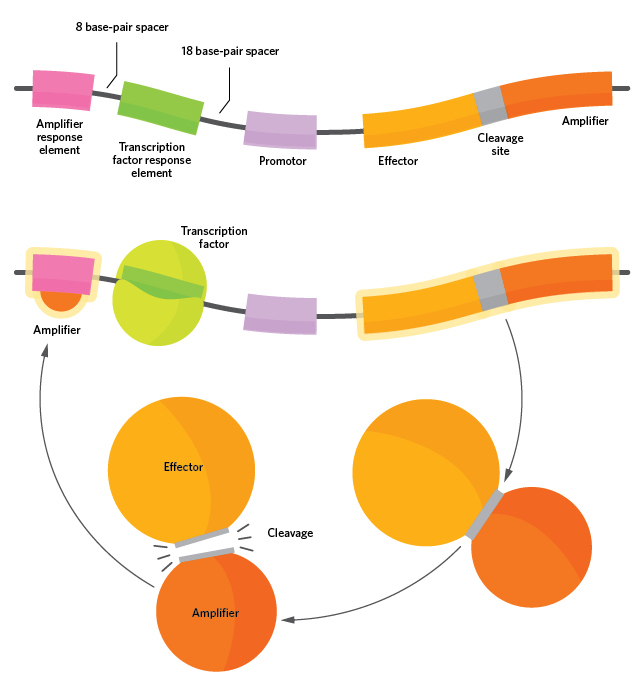 Some synthetic biology applications use cells as mere hosts for engineered genetic circuits—for example, when cells act as factories for desired molecules. For other applications, however, researchers would like to integrate the synthetic circuits with the cell’s...

Such integrated systems could be used to sense particular molecules and induce appropriate responses. For instance, detection of a metastasis-inducing protein in a cancer cell might be used to trigger that cell’s suicide. “The concept is that these synthetic circuits will be able to read out bits and pieces of information from the cell and interpret them to make decisions and drive the cell in different directions,” says Yaakov “Kobi” Benenson of the Federal Institute of Technology, or ETH, in Zurich.

Benenson and colleagues have recently generated genetic constructs—or “transducers”—that can detect the presence of specific transcription factors in human cells and, in response, activate synthetic processes—such as the expression of particular proteins, the silencing of mRNAs (via microRNA production), or the induction of targeted genetic recombination.

The constructs are similar to tissue-specific expression vectors, in which promoters with cell type–specific activity are used to drive transcription of a desired gene or genes. The difference, however, is in the constructs’ precision design and ability to detect cell states, not just cell types, says Benenson.

Having established key design principles, the team was able to create transducers that detect a variety of different transcription factors. In one scenario, for example, detection of the developmental transcription factor Sox10 drove Cre recombinase activity and, in turn, the recombination-dependent expression of a fluorescent reporter.

The nice thing, says biological engineer Ron Weiss of MIT, is that “in principle, [the constructs] are relatively modular so you can plug-and-play” with the particular factor you want to detect. (Cell Rep, 16:2525-37, 2016)