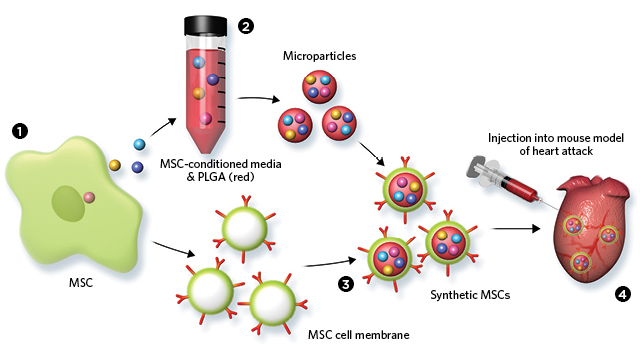 Mesenchymal stem cells (MSCs) are typically derived from adult bone marrow and fat tissue and are currently being tested in hundreds of clinical trials. They secrete proteins and other molecules that, when released to tissues, can promote regeneration, acting “like a pharmacy that provides drugs for tissues to heal,” says Ke Cheng, a biomedical engineer at North Carolina State University and the University of North Carolina at Chapel Hill.

To address these shortcomings, Cheng and colleagues engineered synthetic MSCs (synMSCs) built from human MSC secretions packaged in a biodegradable microparticle that was then coated with MSC cell membranes. These artificial cells withstood harsh cryopreservation and lyophilization (freeze-drying) without losing any of their properties. And when the researchers injected the membrane-bound particles into the hearts of a mouse model of myocardial infarction, the “cells” were able to promote regeneration to roughly the same degree as human MSCs.

SynMSCs could one day lead to off-the-shelf stem cell therapies, Cheng says—something that is very difficult to achieve with human- or animal-derived stem cells due to their fragility.

“I think it’s a clever idea, and it has potential,” says Joshua Hare, who develops cardiac cell therapies at the University of Miami Miller School of Medicine. “This is really a proof-of-principle demonstration, and there’s a lot they have to do to get it to the level where it could actually be usefully applied.” (Circ Res, doi:10.1161/CIRCRESAHA.116.310374, 2017)