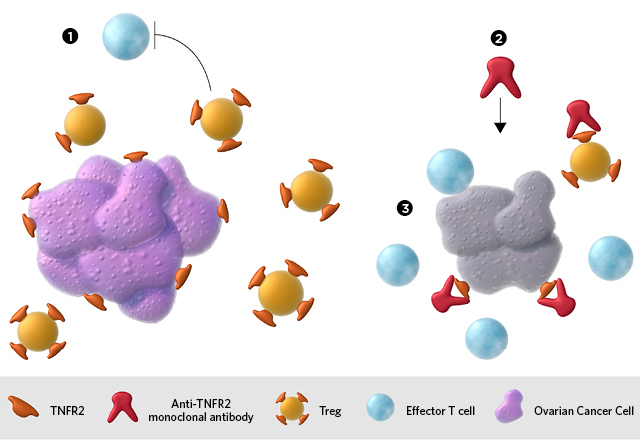 Tumors are adept at locally suppressing the body’s immune system, creating a microenvironment that allows unchallenged survival and growth. One way they do this is by recruiting high numbers of regulatory T cells, a type of naturally immunosuppressive T cells known as Tregs or Tregs.

To counter this suppression, scientists are investigating ways to boost cancer patients’ immune systems to encourage tumor destruction. But it’s a delicate balance: too much immune activation and there’s a risk of potentially lethal autoimmune disorders—as has been reported for some...

Searching for a more refined approach to immunotherapy, Denise Faustman and colleagues at Massachusetts General Hospital and Harvard Medical School have discovered that many tumors recruit a particularly potent type of Treg that expresses a receptor called tumor necrosis factor receptor 2 (TNFR2). These potent Tregs are rare in the rest of the body, but especially abundant within tumors. In some cases, cancer cells themselves express the receptor.

TNFR2 activation promotes Treg proliferation, explains Faustman, an activity that “has not gone unnoticed by tumors, and they’re abusing the receptor in the same fashion—for preferential growth,” she says.

Faustman therefore hypothesized that antibodies against TNFR2 should target tumor cells as well as Tregs. Sure enough, her group’s newly developed antibodies killed both tumor-associated Tregs and ovarian cancer cells, in culture. “It’s a double whammy,” says Joost Oppenheim of the National Cancer Institute. What’s more, non–tumor-associated Tregs were considerably less susceptible to the antibodies, which could reduce the risk of systemic toxicity.

Faustman’s team now plans to study other types of human tumor specimens to evaluate the breadth of the antibodies’ cancer-killing capacity. But, ultimately, says Oppenheim, “the question is: How will anti-TNFR2 compare with better-documented [immune activators]? .  .  . That really can only be established by looking in vivo.” (Sci Signal, 10:eaaf8608, 2017)