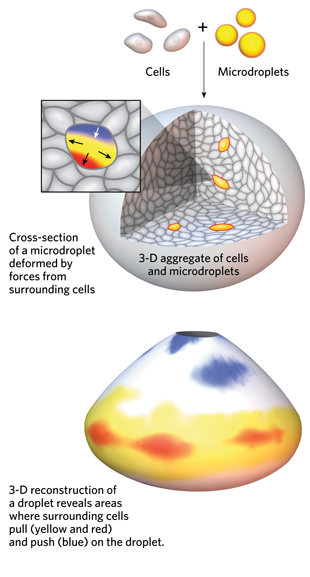 PUSH AND PULL: Cell-size microdroplets of fluorocarbon oil, coated with cell adhesion molecules and a fluorescent marker, are microinjected into a tissue, embryo, or cell culture. Researchers capture the distortion of the droplet’s shape using fluorescence microscopy and reconstruct the images to form a 3-D representation (artist’s rendering above, lower). The different colors represent the various degrees of tension from surrounding cells.© GEORGE RETSECK, 3-D RECONSTRUCTION REDRAWN WITH PERMISSION FROM OTGER CAMPÅS AND DONALD INGBERDuring embryonic development cells push, pull, and squeeze each other to fashion organs and shape the growing body. Researchers have methods to measure the physical forces cells exert on artificial substrates, yet there were no tools to quantify cellular forces in living, 3-D tissue. That is, until Otger Campàs, now a bioengineer at the University of California, Santa Barbara, and Donald Ingber, a bioengineering and pathology researcher at Harvard University, developed a tool...

The approach uses cell-size microdroplets of oil coated with a fluorescent marker and a ligand for adhesion proteins that stick cells together or to the extracellular matrix. Once the oil droplets have been injected into a tissue, cells push and pull on the droplets, deforming their shape. This distortion is visually captured using fluorescence microscopy, then quantified by image analysis and a precise understanding of the forces required to change the droplets’ shape.

So far Campàs and his colleagues have tested their technique on 3-D aggregates of mouse mammary epithelial cells and on embryonic tooth mesenchymal cells, both in cultured aggregates and in the living tissue of mandibles from developing mice. Campàs is now working on testing the method in intact zebrafish embryos.

Prior to this droplet method, laser ablation was the only technique that could evaluate cell tension in vivo. But laser ablation is not quantitative, providing only a relative comparison of surface tensions, says Craig Simmons, a cellular mechanobiologist at the University of Toronto.

Emmanuelle Farge of the Institute Curie Pasteur in Paris who, like Simmons, was not involved in the work says that “introducing a passive cell into a multicellular system is a very elegant way to evaluate forces in situ in living tissues.” (Nat Methods, doi:10.1038/nmeth.2761, 2013)